It’s not my first time. Years ago when Coyote was still a green youngster I was riding him at a branding. The cows calved down on the river bottom. The branding corrals were up on the bluffs above. We had to push the pairs up narrow trails snaking straight up the steep hill face. They moved as mama and baby calves do, trying to go the opposite direction and pushing back making every step forward a struggle. Coyote couldn’t handle it. He started getting light on the front end. I hopped off. Being a girl surrounded by guys, riding a Morgan in a sea of quarter horses I already stood out like a sore thumb. I felt judged constantly and needed, for my own piece of mind, to do an excellent job at everything I did, yet, here I was, having to get off and walk my horse. If I only had the sense to get a quarter horse like a normal person I wouldn’t have these problems.

It may have been embarrassing but I lived and he turned out, eventually, to be a truly great horse.

Yesterday I took Rusty out into the corn field. In the corrals he can sull up and refuse to move. When we’ve gone out before he frees up and moves out beautifully. Those times we rode out into the corner of the pivot, right behind the yard. Now there are oats planted there. The corn field under the pivot isn’t planted yet, we could ride there, as long as we stayed out of the oats. I walked alongside Rusty down the long driveway until we passed the oats. Then, still on the gravel drive, I climbed on. He didn’t immediately dump me and run home, we were off to a good start.

As I pointed his nose to the distant horizon he pricked his ears forward and started off. he broke into a trot, I asked for a walk. With many repeats we kept that up and all was well until we nearly reached the pivot. Then things changed. His other swirl kicked in, one for each personality of course. He wanted to go home. He was trembling, ducking out with his left shoulder as he threw his nose in the air and fell sideways. I was happy to have a one rein stop. Twice I pulled his head around to hold him long enough for me to jump off.

The first time I did some ground work to calm him and get his attention back to me then I climbed back on. I must admit that the soft dirt of the plowed field was all that gave me the courage to get on. I hoped to have room enough to regain control before we got to the oats, no holes to trip him if he ran off, and soft footing to wear him out enough to help me bring him to a stop if he ran away, and to cushion my fall. Fortunately none of those things happened or were needed. I jumped off again first.

It was a long walk home.

Once we reached the house I got on again in our usual arena. It went a little better, but not good. I pondered training methods and bits. I wondered if clicker training really worked. Maybe I needed to go back to training the “regular” way. Then I was honest with myself. The training methods weren’t the problem, the trainer was the problem. I had done everything the stupid girls in the Disney horse movies I hate so much do. Maybe not everything, I didn’t sneak out at night to ride him. Other than that though I think we had it covered.

I took a horse without sufficient training out into the great wide open trusting that the bond between us would make him do what I wanted and keep him from killing me. Talk about stupid. Sure I didn’t think of it that way but it’s the way I acted. It was lumping at its worst. Taking huge leaps and bounds in his training without preparing him properly. Maybe his trainer will eventually figure out what she’s doing. 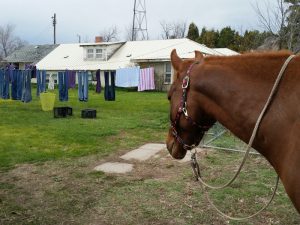 2 thoughts on “Walk Of Shame”