I’ve been riding Rusty in a halter. It works well for us. I want to greatly emphasize that it is working well. He hasn’t run off with me, mostly he stops to a shift of weight and an exhale. He steers light and responsive. Any problems we have are green horse problems coming from lack of experience and lots of enthusiasm. I want to make that clear because few things drive me as crazy as the old “my horse wont stop anymore, I need a harsher bit” thing.

That said I want to start riding him in a bit.

I wasn’t sure what exactly I wanted to do for a bit though. I usually ride young horses in my much loved snaffle that my mom gave me way back in high school. It has seen many colts, many miles, it’s a great bit, simple and beautiful. When I first started Rusty we used it. He didn’t like it, Coyote doesn’t either. Some horses are just weird. That is how we came to be in a snaffle. He was at that age where baby teeth are coming out and mouths tend to be uncomfortable. He’s getting older and, maybe, past that now. I put the snaffle on him for a ride and let him carry it without attaching any reins. He was fine with it. But I still wanted to see what else was out there.

I want the bit so we can work on some finer points. We are starting work on side passes, yielding hind quarters and such. I want to be able to gently, slightly, pick up one rein and speak to one side of his mouth. In a halter I have to stretch my arm clear out to the side to give a directional aid. That is a lot of work, slow, and not graceful. And not efficient. I can’t hold steady pressure on one side while turning slightly to the other, it has been bothering me.

I happened to see a comment with a picture of a girl’s horse in a new type of bit I had never seen before. Like the war bridles I had admired for so long, she didn’t have a headstall on her horse. Unlike the war bridles her bit had rings on each side like a snaffle. The bit was leather with a chin strap that held it on when used without a headstall. I was intrigued. I researched a, very, little bit. Mostly asking her how she liked it. She and a friend of her both rode in them and both loved them. We found where they were sold and ordered one. I can’t wait for it to get here so I can try it! Hopefully it works and Rusty likes it. It’s a big expenditure for me, mostly I’ve been riding in the same tack since high school. 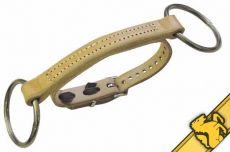