It’s awful. I have this great new toy but haven’t been able to play with it!
Ok, it only came yesterday (day before yesterday now). I want to play with it so bad! I snuck out while the children were outside playing with their cousins the first night. The bit was so pretty, shiny and new. I got Rusty out and forced it into his mouth. Maybe a slight exaggeration but I did push things a little faster than I ought to have. He’s only worn a bit once since the middle of last summer sometime. He was not interested in having it in his mouth. Although the bit is supposed to be able to be used without a head stall, on a horse who is use to it and to wearing a bit period, it became apparent to me that I should have put it on a headstall before trying it on Rusty. It was not going to stay without help.

I had picked out a headstall to use earlier, after ordering the new bit, so I went up and got it. Put the headstall on the rings of the bit. It was ready. I was ready. Time to try again. And here came the children, done playing, the cousins were leaving, at least one child was crying. Oh well, maybe tomorrow.

The next day dawned dreary and overcast. The children were exhausted and cranky. Rusty was mad at me for putting something in his mouth and only wanted to go eat grass. I put it on him and otherwise ignored it. I brushed him thoroughly, picked out his feet, and worked on other stuff. Then the bit came off and he went back to his pen.

The next day rinse wash repeat. He quit being quite so mad about it, but still wasn’t speaking to me. Usually I turn him out to eat grass before I work him. He is so obsessed with grass right now, it’s hard to get him to pay any attention. I thought maybe if he didn’t get grass ahead of time he would be more interested in treats. Didn’t work. He was only interested in picking at the few green weeds along the side of the pen. How can a few measly treats compare to the lush green grass. Then it finally dawned on me. Why fight it? Why not join in? If, when hopefully, I work him today I will pick a large bucket of grass to use as a reward. Duh. Sometimes I amaze myself with how long it takes me to figure things out.

Oh well, so much for getting to try riding in my new bit. There I go rushing things again. 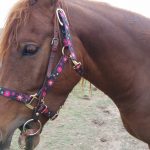 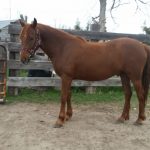 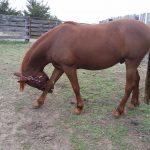 One thought on “The New Bit Is Here! But…”