As we came through the yard the father-in-law waved us down. I thought I was going to be in trouble, but not this time. He wanted to know if I could bring a horse. The cattle are still in the feed lot, waiting for working and summer pasture. A calf had climbed through the feed bunks and was in the wrong pen. Of course he couldn’t find his way back so there they stood, on opposite sides of the fence, calling each other.

I was going to just throw a bridle on Coyote and go bareback, but decided to saddle him in case we had to do any real work. He stood in the yard munching on grass as I quickly threw my saddle up onto his back. The kids were on the four wheeler with the father-in-law and we all went after the cow. Halfway there they got called to go refill the planter with seed and Coyote and I continued on our own. Gates opened and closed, respectively, behind us we easily found the cow on the fence looking for her calf. It was easier to move her than to try to get the calf out. Ears back, teeth probably bared, it suits him but I couldn’t see, he dove in behind the cow. Neck stretched he maneuvered behind her, driving her towards the gate. She stopped and tried to turn back. Coyote dropped low meeting her nose to nose as he wove back and forth matching her in the dance. Recognizing her equal she turned and fled before him, fleeing out the gate.

With cow and calf reunited we turned our attentions to a new target. A calf lay dead just through a gate. Lost to sickness, quickly, unnoticed until too late. His mama stood watch, mourning her loss, unable to understand why he wouldn’t rise. It would be a simple job to bring her out the gate, to a new pen or a new calf. The rest of the crew had finished refilling the planter and were back to help. Leaving them watching from the lane I urged Coyote into the pen.

Of course no job that seems simple ever will be. The cow was unwilling to leave her lost calf and the pen. Near the gate recent rains had left deep, mucky footing, slick and treacherous. Easing up to her gentle and quiet I was caught off guard as she spun away. Coyote lunged after her. My saddle was loose and nearly slid off his side, I wrapped my fingers through his mane, clinging until balance could be found. Then he was back under me again, following the cow as she dove the other direction. Nothing more than a passenger I stuck with him, only trying to keep him out of the worst footing. I did offer an opinion as he gave up position in an attempt to eat the cow. Pulling hard on the reins I tried to prevent his teeth from closing on her back, tried to put him back in position, tried to keep him from loosing her as he took his revenge. I failed. We turned her back as she reached the far side of the pen.

Back and forth they fought, head to head, neither willing to give. Our arch grew smaller, passing the gate each time, until at last she turned and pretending that it was all her idea, ran out the gate with her tail over her back. Coyote was winded. I was beat. The job was done, my horse was awesome and I couldn’t stop grinning. Pausing to let Coyote breath as the cow ran through the open gate into her new home, the children began clamoring for a ride. Rested and ready to get home Coyote was pulling towards the final gate blocking him from his destination. I asked him to please wait a moment and instead step over to the four-wheeler? He acquiesced, if not willingly then without protest. One child after another stood on the back of the running four-wheeler, reached for a helping arm, and scrambled onto his back. Behind the cantle for the oldest, squeezed into the seat with me for the youngest. For this short ride, on a trusty mount, the usual helmets were forgotten. Coyote the hot, cow eating horse of a moment before lowered his head and plodded happily along. The youngest, nestled in front of me, took up the reins, guiding us home. 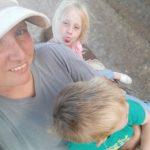 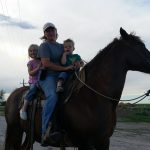 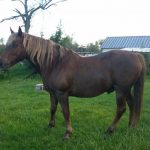 3 thoughts on “The Perfect Pony”