The horses have a little pasture I made them, back in the tree row. Belly high grass, untouched except for by deer and children’s feet as they scamper through finding one hideout or another, trees overhead offering shade and room for them to wander together grazing and dozing as they wish. Only they don’t wish.

Summer is here. The days are hot. The flies are atrocious! All they want to do is stand in the sun-baked, dust corral and stomp flies. I cover them in fly spray and the flies think it’s candy coating. I turn them into their lush, shady pasture first thing in the morning and they are back in the corral by midday. This works, for the most part, except that Rusty has developed a terrible neurosis. He is terrified of the gate. Coyote and Onna come in and he is left out there, alone, frantic to reach his friends and yet, unable. He races the fence-line, calling for them desperately, begging them to come back to him. They ignore him completely. Secretly mocking him. Probably taunting him in their unmoving, horse way.

I go out to save him, calling to him as I come so he will know help is on the way. He answers with an overwrought whinny, thrilled that help is coming. Galloping to meet me, he leaps a branch and turns the corner. Then stops. He is stuck. Back around the corner he goes and then returns to me, stopping short of the gate every time. The first time I was unaware of any problems, I thought he was having a moment of confusion as even the best horses will. He nearly smashed me as I lead him through the gate. He was lucky to survive such a dangerous undertaking and galloped madly to join the other two, stomping flies and laughing at him.

The next time I took a lead rope but no treats. It was harder than the first time even. He hesitated, I waited. I encouraged, he offered tiny brave little steps. Finally we reached the gate. Hesitating for an endless moment he held his breath and dove through. I had learned my lesson the first time and was standing well clear. I held him as he attempted to run off and join his so called friends. Long enough to remove the halter, then he was free.

The third, and last time, they are staying in the corral now, I had a halter and treats. I asked for a small step forward then rewarded. Once more and a reward. I worry that this is what they call poisoning the reward and ask for another small step. At the gate I open another small gate that doesn’t get us out unfortunately, because he goes right through, and we try the gate from a different angle. He still rushes madly, but he is back in his corral where he can be happy. I reward generously and leave the gate closed. They are welcome the the hot, dry, dirt of the corrals. This time instead of taking off he walks beside me, posing as we go, asking if he looks pretty enough to get more cake? I say no, not because you don’t look pretty enough but because I am out of treats. He stands by the gate I leave though asking me to take him out it too, please. 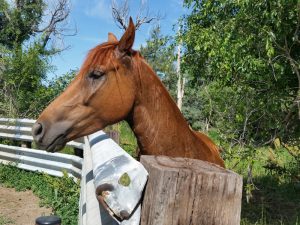 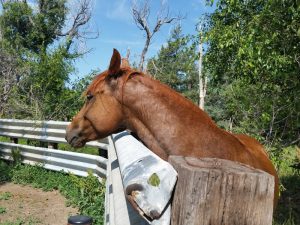 Yes of course I stop to take pictures of my horse while he begs me to save him.