My husband is brilliant really. He shoved me out the door to work Rusty so that Rusty wouldn’t be left to marinate in the bad memories of our wreck. In the end though, I benefited just as much as Rusty did. More so perhaps.

Rusty seemed mostly unfazed. I had let him out to graze earlier and he wasn’t interested in talking to me. I understood and accepted his indifference. I deserved it. When I went out to work with him I wondered if I would be able to catch him. He was out in the wheat. I walked out to the fence and he noticed me right away. Head up he looked at me. I called to him and he walked towards me immediately. Things weren’t as bad as I thought. We worked on little things as we walked back to the house, whoa and back and good leading position. He looked pretty hard at the yard when we walked past. My husband keeps asking me not to let the horses in the yard. I am going to make a concerted effort to oblige him, that would solve a large portion of the problem.

He did walk willingly past though, clear out around the trees to the back of the house, and, there, at the pickup I tied him. The second of the changes I am attempting. He was not happy. Sticking to the plan though I clicked him as soon as he stood on all four feet for long enough to allow it. I loaded up on hay cubes and kept a good supply in front of him while I trimmed one hoof. I didn’t say I was going to ride him, I said work Rusty 😉 Besides I had convinced myself he was off slightly and his back could be sore, anyway, no riding. He needed trimmed anyway. So, I got one hoof done. He stood tied nicely, not fighting or pawing. My knuckles were aching from the cold and previous injuries coming back to haunt me. After one foot I untied him and we played fetch. Then the second hoof.

We went on like that, rewarding him for standing quietly, fitting other things in between trimmings to give me a break more than for him. I saddled him, no issues there at all. I had to make sure my saddle was really ok. I’ve spent a fair bit of time wondering if a full grown cow or a clothes line posts and all exerts more pressure. The saddle is made to hold a cow on the end of a rope. I hoped that this wouldn’t be able to break the tree or, what? Who knows what it could have done but I can think of plenty of things to worry about. It seemed sound and whole so we went for a walk. Out behind the scary chicken coop. Up and down the hill into the dump. Then up the hill behind it into the trees. That part was really scary and he didn’t want to do it more than once. Then back to finish up his feet.

It was a very simple lesson. Easy for him, I was going to say both of us but trimming gets harder all the time. I’m getting old. I didn’t ask for anything challenging or stressful, just enough to leave him with a different memory than the bad one. And I felt SO much better afterwards.

I hadn’t realized how badly the whole thing had affected me. I hadn’t wanted to go work with him. I didn’t want to do anything with him or any of the horses. I felt sick to my stomach and thoroughly shaken. Now I feel, good. My confidence is, mostly, returned. I am assured that he is fine, I didn’t break him, mentally or physically. We are once again on good terms. We both got back on that horse and life is good again. 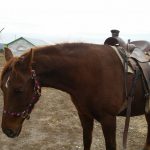 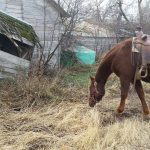 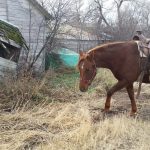