It seems like every really bad ride is followed by a drastic leap in his understanding. Unfortunately sometimes it also goes the other way. We have been doing so well together. I can watch videos of him and see how hard he is thinking and concentrating on what I ask. It lots of fun to see those wheels turning in his head. His great try and concentration are some of his finer points, but also a big drawback. He needs constant attention and I need to match his concentration in order to keep up with him.

I shouldn’t have brought him in  in the first place. I was exhausted, so tired I could barely focus enough to keep my eyes open. The morning had been warm after starting out cool and foggy. The kids lay down for their naps and I finally had a chance to enjoy the good weather. When I got outside it was cold and cloudy again. The feel of snow was in the air. My husband went by with a four-wheeler and stopped to talk for a minute. Snow was indeed on the way and the temps were dropping. I told him I would try to work Rusty real quick before it got worse. The next few days were going to be cold and I didn’t want to miss my chance.

He and Onna were standing at the far end of their pen watching Coyote graze out in the wheat field. I called and Rusty came ambling along to answer. From the first second I let him out the gate I could tell that his attention was elsewhere. He knew Coyote was out grazing and kept thinking hard about joining him. I convinced him to come to the yard with me. He stayed and ate while I curried him, but wandered off while I got the saddle out. I tied him to saddle, something I never do. After saddling I turned him loose again then went back into the house to refill treats.

When I came out he was standing at the clothes line. The saddle horn was just touching the first wire. Heart in my throat I tried to circle out around him so I was applying pressure away from the clothes line. Working him like I would a cow. Looking back I probably should have just walked up behind him. He walked that last step forward and felt the wire on the saddle horn. It spooked him forward further which tightened the wire more. He shot forward pulling the posts over. The force of it knocked him onto his butt. He got up and ran sideways, the wire at the horn not allowing anymore forwards. Finally as he sat fighting, off to the side of the clothes line the last wire broke and he trotted off down the drive. Somehow the saddle, loosely tightened, had stayed on his back. Somehow he hadn’t become tangled in the wires and sawed himself to bits. God was watching out for us.

My saddle, that I love so much, did receive some damage. The decorative stingray trim along the front of the pommel was cut through and there were some scratched and scuffs. I am so thankful that it is, for the most part, ok. It is from another time before kids and with lots more riding, back when I could justify the expense. A custom made saddle isn’t anything that will be happening again anytime soon. The clothes line was a complete loss. My husband did not yell at me, quite the opposite. He was very comforting and claimed to have never liked that clothesline anyway. And Rusty seems to be ok. I think he’s a little sore on his left hind. It is extremely likely that it is just me though. I can’t see that he’s actually limping, although I’ve decided he’s slightly short stridded there. My loving and understanding husband is pushing me out the door now to go work with Rusty while I can. Do I really want to leave him with that  memory he says? And he’s right I don’t. For a non-horse person he knows what he’s talking about.

So what am I going to do differently to make sure this doesn’t happen again? Well the clothes line is gone. My kind loving husband got it cleaned up this morning. Figuring how to prevent this exact catastrophe is pointless. Not because the clothesline is gone but because it seems like covering a bigger picture would be wiser than one tiny issue. I think we do need to start tying. Maybe not for saddling, I want his feedback and to make sure I’m not rushing and doing things he’s uncomfortable with. But before and after. The times I am running back and forth getting stuff from the house. he does need to learn to stand tied anyway. If we ever do start showing he HAS to know how. Being mat trained isn’t good enough at a busy fairgrounds or parking lot. We will start small, clicking for one second of not pawing and no fit throwing, and build from there. See if my theory really works.

The other big issue, I think, was me not him. I take full and complete responsibility for the accident. Looking back I can see everything I did, every sign of things to come that I missed, everything he said to me very clearly that I didn’t listen to. The cure isn’t to not let him have liberty but for me to know when I shouldn’t be out working him. When I am distracted or too tired. He requires my absolute and complete attention and as much as I know that I need to heed it. 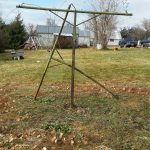 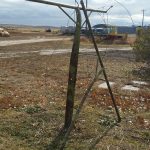 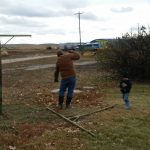 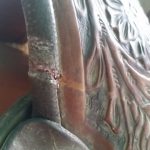 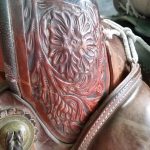 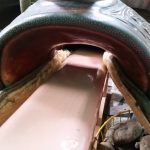 One thought on “Coming Down From The High”