We aren’t adding any steps, just practicing the ones we are getting. I am trying to add a cue other than my voice. I haven’t settled on what to use. Rusty as seemed a couple of times to work well off a weight shift and light squeeze, I have to be careful though because he gets confused about what I am asking. He thinks I want him to turn on front or hind quarters or walk off.

We’ve been continuing our walks out of the arena. Down our big hill 😉 into the dump. 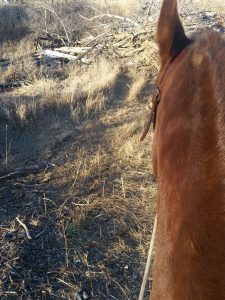 Out around the yard. I was in the process of worrying whether our walk was getting too predictable and if I should change it up a little before he came to expect to go to the same spot every time, when he trotted off. Apparently it was getting to predictable. It’s a fine line between repeating something until it’s comfortable, and habit. So we took advantage of the trot to work on whoa and redirected our course. We chose a different spot to graze. 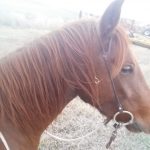 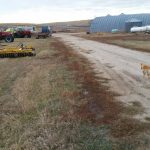 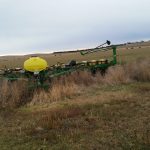 After getting some good eating in it was time to meander some more. It is interesting to me that he is so happy to ride through our yard, full of scary stuff. Before his small breakdown I looked at the big open field and thought it looked like such a nice place to ride, away from the scary things. I didn’t ask him what he thought. He has no problem with the stuff in the yard, he thinks the field is pretty scary. Until life becomes less stressful for him and he is riding better I will let him have more say in where we go. I did push him a little today though.

We rode farther into the stack yard and up to the top of the hill by where a large group of cows were grazing. It was new for us and a place where Coyote dreads to go. For some reason he hates that spot. Apparently Rusty feels the same. He was getting tighter and more worried as we got to the top of the hill. His head was up. ears going a million miles an hour, I got off. No reason to get in a fight. He had been good for the whole ride, it wasn’t  a long walk back. Getting off is almost as good a reward as food. 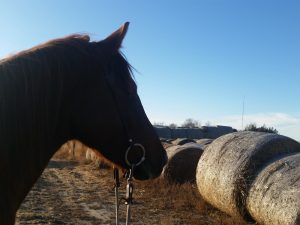 One thought on “Second Try”