It has been crazy busy getting ready for Christmas, going to Christmas programs, doing all the things. I have been riding Rusty, he’s been doing wonderfully, I just haven’t had time to sit down and write about it after. The Spanish walk has slowly been transferring to under saddle. I found, finally listened to Rusty and figured out, what I had been doing wrong. My tendency is to apply some rein pressure when I ask. I think he needs to be on the bit and forward motion controlled. He thinks I need to drop the dang reins and leave him alone to do his thing. He has this, knows what to do without being bothered. I started leaving the reins alone, he started giving a good forward Spanish walk without any fit throwing. 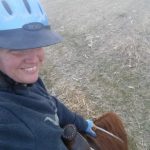 We’ve been doing lots of “trail riding” out through the yard. Building our confidence so we’ll, hopefully, just be able to ride normally someday. The yard is full of fun obstacles and scary things to ride through, buildings, stacks of hay, tractors and vehicles, but much less scary to him than the wide open fields. We’ve ridden out to where the driveway leads out of the yard and looked around then turned back. He did well. I decided that on this ride we were going out. We took a trip around the yard first to see how things were going. They were not going well. The weather was beautiful, warm and calm and building into a big drop in temp that night and snow. He could feel the change coming I’m sure and was hyped and on edge. The first few times I brought him back to a walk. As he kept wanting to trot I gave in and we did a big figure eight around things parked in the yard. He finally settled a little and was willing to walk. We circled the quanset and headed down the driveway.

He was a little quieter, although still very looky, ears permanently perked. We made it to the point where the drive opens into the fields. Cows and electric fence on one side open wheat ground on the other. Not to far off was regrowth intend for the cattle’s winter grazing. If we could just make it to there he would be able to graze, food makes everything better. He was on tiptoe the whole way but we made it. I could feel his body relax as he ate. We sat until I got too bored to wait any longer and asked him to move out. We walked a little grazed a little, jumped over the pivot tracks, maybe over reacting a little 😉 In the end it turned out to be a good ride. He settled down, still looky but not so much on tiptoes and no longer leaping the tiny little pivot tracks. And we made it back alive. Life is good! 🙂

This is how he still comes for me to get on though so he must not be minding the scary stuff to much.