Tanna was home for Christmas break! So exciting. It was zero degrees and everybody was sick for most of the time 🙁 Oh well, we’ll take the good with the bad. Today, nearly her last day home we finally had a chance to ride.
It was forty degrees. The children were in the house with their father, I didn’t have to worry about staying close or hurrying back. We saddled and rode around in the arena a little bit. I had my new bit on him for the first time and he hadn’t been ridden in weeks. I had put the bit on a headstall but hadn’t put a chin strap on yet. I went to get the one off of my old snaffle but I don’t think it has been off since I got the bit, It was petrified, like wood. I didn’t even try to get it unbuckled. Not having another in any better shape I grabbed some rope that was laying around and tied it on. It worked great.
After our brief warm up we headed out into the corn field. We had done this a couple of times before the cold spell with very good results. This time started out the same. Rusty was relaxed and excited about food. Coyote was rusty in his corn finding skills. We let them brush up on that a little digging ears of corn out of the snow. Going down the middle of the field we took our time, letting them eat and look around.
Towards the far end the pivot was stretched along our path. Taking advantage of the available obstacle we weaved back and forth under it. Rusty thought it was pretty terrifying at first. But trusty old Coyote was there to lead the way. With him in front we were able to walk under it but he’d tuck tail and shoot out the other side. With lots of back and forth and grazing underneath he settled down quite a bit.
Down the fence line to the tree row then back towards the house we went with little excitement. We played leap frog, sniffed the ground checking out the scent of the deer who had been grazing there as we started our ride, and visited. Almost to the house again, on the back side of the trees that provide a windbreak to the buildings Coyote saw something. We don’t know what. We really doubt there was anything there but his active imagination. He was sure he was going to die though. Head in the air he snorted a warning to Rusty. Coyote was our moral support and behavioral role model, if he said something was scary Rusty was going to take him at his word!
With lots of snorting and blowing they prepared for the spook. It’s worse knowing it is coming. I grabbed a handful of mane and sat deep. Rusty ducked and spun. I still had a little control. Then Coyote took off. We were gone. Rusty had his head in the air and my hand in his mane was pinched between his neck and the saddle horn.
The ground was slick with the snow melting in the warm weather. He came to a stop without killing us. Coyote was still having a melt down. Tanna was able to kick him away from the trees and we went towards the middle of the field. At an excited prance we continued on our way.
We were having such a fun ride we decided to keep going on to the mail box instead of going home yet. Letting them go a bit we trotted to the top of the hill. Rusty stretched his legs and cantered a little. They came easily to a stop and we walked out and back.
We made it back to the house without too much further excitement. The horses were sweaty. The riders pleasantly tired. It was a nice ride. It was good to have Tanna back to see us, and to have someone to ride out with us. Hopefully after having someone along he’ll be more confident for the next ride. 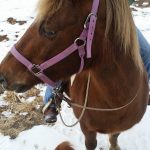 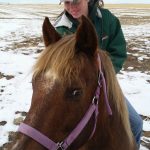 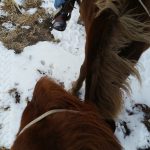