After going out with Tanna I couldn’t wait to get out in the big field again. The weather has been beautiful and even if I’m still fighting the sick I couldn’t stand to waste a day of it. Yesterday we went out and found some calves that had wandered under the electric fence and chased them back in. It was a little scary. He goes after things with enthusiasm. But I was able to bring him back to me nicely and we continued with a very nice ride.

Today he wanted to leave the yard at a trot. I used it to work on transitions a little. Once out on the driveway I steered him into the cornfield then let him go. We had a nice canter up the hill! We whoad once, treated then I actually asked for a canter and we went to the top. I clicked him for such a nice canter and he stopped for his treat. I let him graze a little and we just hung out. I wanted running no to be a big deal and for him to be able to stand and chill afterwards. He did great.

Then we started off across the cornfield. I let him Hoover up any corn he could find as he sniffed his way along. He was very concerned about pivot tracks. After the first few though he started crossing with less hesitance. We made it clear to the middle where the pivot was sitting. I wanted to try to walk under the first section, we would be facing home and I thought we had a chance. He did it with Tanna and Coyote leading but I didn’t think he was over being afraid. I was mostly wrong. He had no problem at all walking under it. Then he wanted to graze right there with it, nearly under it. What a good boy. For comparison, Coyote is still terrified of them. Sometimes. He’s a silly boy.

Then we slowly meandered our way back to the house. It was a good ride! I can’t wait for tomorrow! After that the weather is supposed to turn bad again so we better ride while we can. 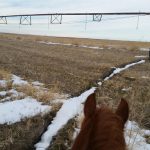 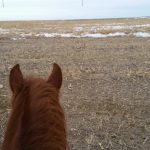 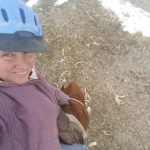