I don’t believe I can even begin to tell you how thrilled I am with Rusty right now! Ever since our ride out with Tanna how ever long ago that was he has turned a corner. Before that he was nervous about leaving our “arena”. Now he trots out wanting to go explore, and eat in, new places. He is my fearless charger, fierce in conquering his surroundings. He’s riding almost like a broke horse!

The tree row that terrifies Coyote? Not a problem, he wants to walk alongside it. Slick footing, all mud and ice? He is happy to slip and slide across it in search of new things. Walk out through the cattle pens with calves or cows moving all around him in tight slippery quarters? He just wants to eat the cows. Cold windy days? He is happy zip through them. Not that he doesn’t try to buck and act like a young horse is supposed to during them but he’s not good at bucking and doesn’t try very often. And he doesn’t spook just gets all big and looky. He’s a typical Morgan, he acts spooky and wants to go fast and lots but is so very trustworthy.

Last time I wrote here I think I had tried some gate work with him. Coming away from it I had realized all the things I hadn’t worked on with him yet. Usually, way back when, side passing and turns on both quarters would have been worked on pretty early on. And we have, he does a pretty good turn around the front or the back. Not a drop of lateral work though. He will give to the outside on a circle but I hadn’t taken it any further. He had no clue what I wanted when we got to a gate. Not just the sideways, it was hard for him to figure out standing next to it and the holding still part.

I did what I should have done in the first place and went back to the basics. We started learning to sidepass. It was slightly tricky at first. There are no good fences and it’s slippery along the ones there are. He is a smart boy though who has learned all about moving away from pressure and being able to click and reward him so he knows exactly what he did right works wonders. He is sidepassing, and leg yielding!, nicely now. And now we have the gate thing kind of figured out. Again the clicking worked its wonders. I feel much more like we are where we should be!

Riding out into the cows has been fun. He really wants to chase them. I wont let him. It’s not good manners. I will let him chose one cow and follow her at a WALK. He has trouble remembering the walk part but comes back down nicely. Mostly I’m taking advantage of the new place and commotion to make sure he’s willing to listen with everything going on around us. And he is. It’s going to take some time for him to listen as good as he does in our calm quiet arena but he’s well on his way. At this rate we might survive some little rodeos this summer and maybe even the big Morgan horse ride at Fort Robinson this fall. Gulp. I might be the one who’s not ready for that one. 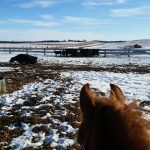 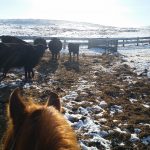 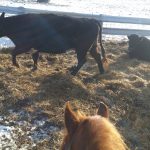 And when we were out riding through the cows we found this naughty guy getting himself a drink. Don’t let anyone tell you that cows milk is only for calves 😉 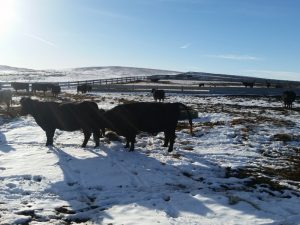