One of the first things Rusty and I did together was to take long walks down the driveway. He spent most of the time crashing into me and hitting the end of the lead rope as he tried to run off. I nearly gave up on him. By the next winter he was walking down the driveway loose at my shoulder practicing tricks and whoa as we walked. Today we walked again, as we often do. Not down the driveway but through the scary trees of the tree row.

It is slick and icy and warm and I didn’t have time to ride even if the slick didn’t make it so dangerous. My daughter and I tried a quick ride Friday and the horses nearly did the splits a couple of times. I wasn’t going to try it today, even had I had time enough. I had been more than a little grouchy all day and was hesitant to even get Rusty out, afraid that my uncertain temper would rear its ugly head with him. Instead the opposite happened. I calmed down and cheered up. I think I had been without my horse fix for too long and was going into withdrawals.

We skipped halters and leadropes entirely for the day. I joined a new group, Obstacal challenges for equine clicker trainers, by Hearths James, it’s been great fun in the very sort amount of time we’ve been in It never ceases to amaze me the amount of really good free, or cheap, clicker training help is out there. A popular Natural Horsemanship trainer might charge hundreds, or thousands, of dollars for a set of DVDs or a membership. So many excellent clicker trainers offer lots of free training advice and reasonable costs on what they charge for. I’ve spent time watching her videos and studying. We took advantage of a day without riding to practice.

Walking up into the trees was scary. Scary places are perfect for slow easy work such as targeting with his chin. Then his cheek, fun simple, lots of rewarding. A great way to make a scary place fun. There are also lots of dead tree stumps. We used them to work on February’s challenge. Sending the horse out, away from you, around an object then back to you. As we worked it occurred to me that Rusty had already learned how to do this around the wing fence in their pen. We just needed to generalize, not as easy as it sounds.

By the time we finished we were calm and relaxed enough to give a good bow in a very scary place and still without any physical means of control. He thought about leaving a few times when it got to be overwhelming. I called him and he stopped, thought about it and came back to me.

And finishing with some random Rusty pictures I hadn’t used anywhere yet. 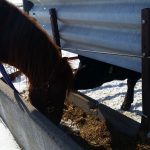 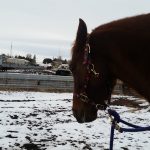