It was her turn to bring something, the kids get a chance once every few weeks to bring something for show and tell. I asked my daughter what she wanted to bring and she said the horse painting. I had no idea what she was talking about, we don’t have much for horse art in the house.
She was disgusted with me as usual, the one your friend sent you, that her horse painted. Duh. Of course silly me, the horse painting. That was well in advance, I was excited but sure that her mind would change before the time came. I didn’t want to force my likes upon her, I asked again as the day grew nearer. Was she sure that was what she wanted? Was there anything else she would like to take? She still wanted the horse painting. I was ecstatic.
We went along to carry it and to bring it home afterwards. I cherish my horse painting and didn’t want anything to happen to it. My youngest played in the sand box while they did, whatever it was that they were doing. Discussing things and coming up with rhymes, until it was finally time for show and tell.
We had talked about Australia on the way in, that it’s on the other side of the world, that our friend is just waking up as my daughter is getting on the bus to come home from school. Maybe not exactly but close enough.
She stood up and proudly held the pictures so that she could see them. I tried to stay back and not interfere. The teachers got the pictures facing the right way and the children pondered how in the world a horse could hold a paintbrush?! She told them that the painting came from Hawaii? Oh yeah, Australia! I carefully keep the pictures of Monty and Ineke with their painting, and she showed them around the room. I did join in a little to point out that in the picture with the Monty’s paintings on the beach, there are crocodiles in the water and you can’t swim.
There was lots of discussion and some decided that if they were holding a paintbrush in their teeth they’d hold the side with paint in their mouth. Everyone giggled a lot. I wished that they were old enough that I could bring up positive reinforcement. And that it was any of my business to do so. All in all it was a resounding success. 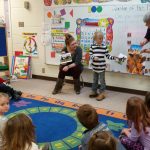 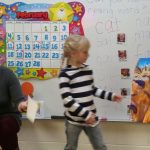 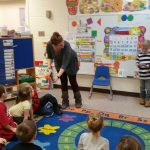 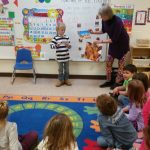 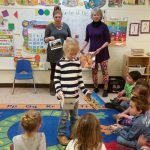 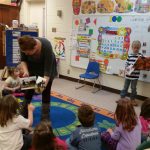