We haven’t been riding through the cows as much as I had hoped. Some weird thing about parenting. I guess I’m supposed to watch them instead of play with my horse? And it got cold and snowy and wet. Lots of time spent on a four-wheeler.

We did get out once this week. I love the way he walks next to me and stands quietly while I get gates without me having to hold onto him. The first couple of times I sent him through a gate without me I was afraid I’d be walking home but I put my faith in him and he well rewarded me. Once we made it out of the corrals and into the cornstalks he was raring to go. I let him and we loped out through the stubble. Other than a slight drift towards the buildings he went wonderfully. He’s learning to rate himself, he’s not trying to take off as much any more. That helps me to sit him better. I’m relaxing into the saddle and not stiffening and flopping around as much, which probably leads to more bolting from him, which leads to more stiffening from me. It’s a bad cycle that we are managing to break.

After making quick work of the cornstalks we got to the pasture. He was puffing pretty hard. I had hoped he would use up his energy on the mostly flat ground and be more settled once we got to the hills. He is a Morgan though and he was no where near tired. Fortunately we took the time to put a good foundation on him before heading out into the world.

The cows were clustered near the corrals where they had been fed. He found a calf there and since I couldn’t see it’s mother close by I let Rusty say hi. He sniffed and followed and played with it for awhile then we went through the rest of them. Then out around the pasture. Holding onto faith in a horse is easier when it’s not so far down. He did good though, up the big hill and around. He was nervous and wanting to prance. I kept rewarding him for a walk on a loose rein. We made it past the windmill without any issue. Around and down (which always gets C.W. McCall’s Wolf Creek Pass stuck in my head; down and around, and around and down, we run out of ground at the edge of town) and through the corrals then out the gate and home.

Once home and unsaddled we worked on laying down again. Nothing like a hot sweaty ride to make that easier. He did wonderfully a couple of times. I think he gets frustrated with me for ruining his roll. He has to think hard on whether it’s worth the food to pause his rolling. He hasn’t figured out that I don’t want him to get up, he’s welcome to keep rolling. He could stop and eat then roll, eat then roll, then eat. It could go on as long as he wants. He finally stayed down to eat and we stopped after that one. I turned him out so he could roll for reals and hang out with is friends. He thinks I’m punishing him by turning him loose. It’s nice that he wants to come in and ride but it makes it hard to put him away when he really wants to stay. It’s the only time I need a halter on him. 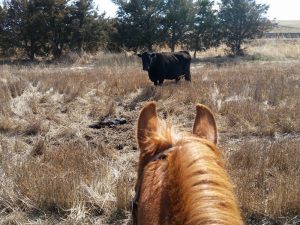 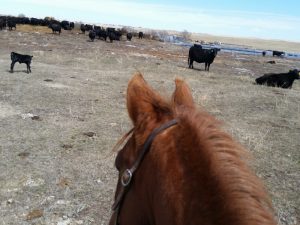 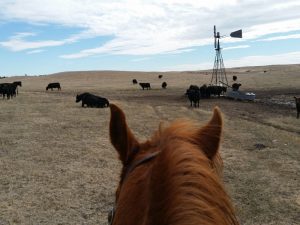 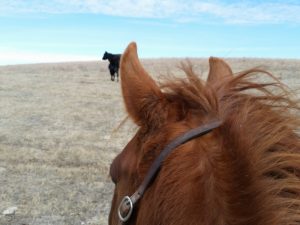