I was going to ride through the cows.

We ended up moving them instead. There was a spring storm forecast and it was decided that the cattle should be moved off the cornstalks and into the pasture where they would have to be behind the windbreak. Given a choice cows would drop their calves out in the wide open, without any shelter. In a bad storm that would be the end of it. So we feed them up close to the windbreak and hope they don’t wander too far to calve. Ranchers were some of the first to train with positive reinforcement. They’ve been doing it forever and don’t even know it. Fortunately the storm wasn’t a bad one. Good wet snow but not the wind or too cold.

I walked Rusty through the corrals, I would have to get off to open gates anyway and might as well get through the scariest stuff on the ground. We found one cow with a new calf and one calf left along while his mother grazed. We walked over to him and did the introductions from the ground. When a calf is walking under a horse for the first time being on the ground can be a very good thing. Rusty took it well, he was very curious and interested, lipping the calf and sniffing. He did not think he was OK with it nursing him though and jumped away with some squealing.

Out in the cornstalks we found the little guys mom not far away and sent her back in to baby. The others were showing up with four-wheelers then and we trotted up to them to begin our being one of the four-wheelers training. The first thing we came to was a cow with twins. Cows can do a great job of raising one calf and some cows will raise two. Most wont. This one was happy with one and not interested in the other. She was leaving. I took advantage of the opportunity to teach Rusty about calves from the saddle.

People think trick training is silly. Not of any use in a real riding horse. Those of us who trick train know better. Rusty sniffed the calf when I asked him to drop his head. The calf didn’t get up, Rusty did get rewarded strongly for his interest in the calf. I asked for a Spanish walk and Rusty gently pawed the calf. The calf finally got up. Rusty sniffed some more then pushed it with his head. Lots more rewarding. That’s exactly what I want in a good working cow horse. Coyote knows where we are going and will push a calf very long distances. It was good to see Rusty is willing to offer the same thing. He picked his head up and, after a good reward, I asked for Spanish walk again. Rusty lifted a leg and in the process gave the calf a good push. Lots of reward again. Calves don’t travel well by themselves if their mom’s aren’t their telling them to. Often not then either. A horse that can “help” move the calf along is a great thing to have.

My father in law came back from running the other twin and their mom up to the corrals with the four-wheeler then and took the calf up in front of him. I’m not sure Rusty is quite ready for me to carry a calf in front of me on the saddle yet. We went off to help move the rest of the herd. Rusty did good if overly enthusiastic. The cows went easily. He worked well with his four wheeled herd. Once through the gate and the terrifying tunnel of trees that accompanies it we were done with cow moving and went to brave the windmill again.

We made it past with me mounted! Then he had a melt down. Over what I don’t know. He couldn’t walk. He pranced then walked. Then pranced. Then walked. He frothed and foamed and looked around nervously. Until we got back to the cows, then he settled right down. Was he that upset about being away from the cattle?

We walked through them all looking for anyone calving then back to the house. He did a great job moving cattle. Better than he had his last time when we just pushed them out of the corrals. I can’t wait to do it again! 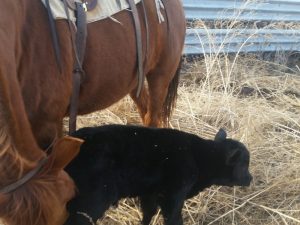 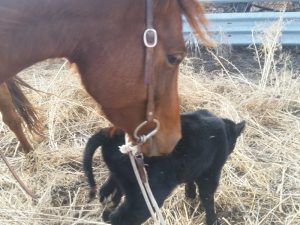 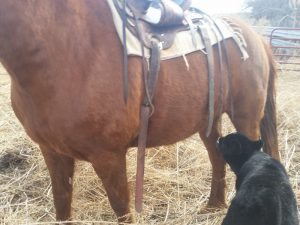 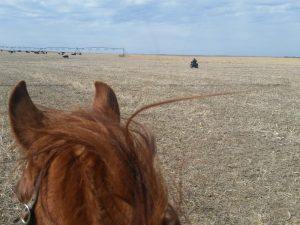 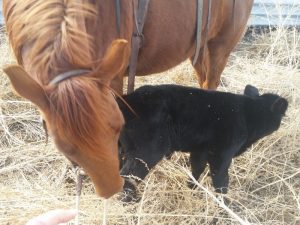 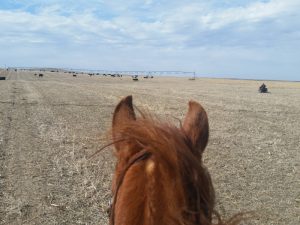 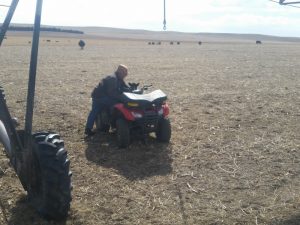 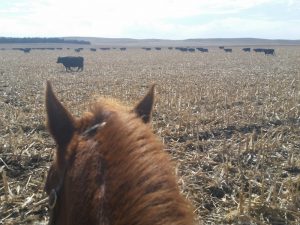 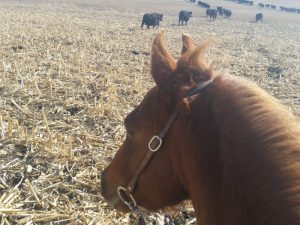 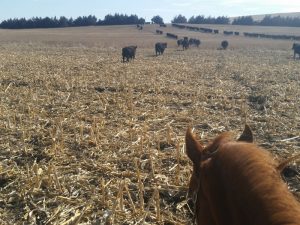 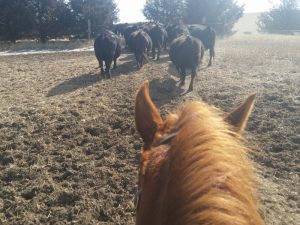 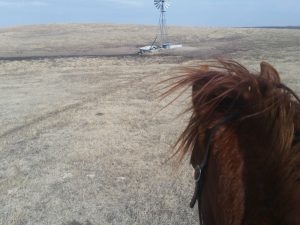 One thought on “More Not Laying Down”