Horse people are some of the nicest people out there. It never ceases to amaze me how kind they are and how willing to help. I want to thank all of the people who have offered condolences and help. I mentioned in passing that we were looking for another horse and many people mentioned one they had seen on a Morgan page that might work. And a neighbor called and offered the use of her good old gelding.
I think we are going to take her up on it. Her granddaughter wants to rodeo too and she invited us to come along. It will allow my daughter to do what she wants without me having to deal with so many of the difficulties(my horses). That doesn’t mean we aren’t looking for a horse for her still.
What we are going to be doing though is fostering for Forever Morgans again. That is how I ended up with Rusty in the first place, for anyone who doesn’t know our story. We are proud to be a failed foster in his case.
After loosing Onna I poured over their pages looking for that one horse who was out there waiting for a home who already fit our criteria. An old horse, former Amish, broke to death, and quiet for a small child. There wasn’t one who immediately fit the bill. Especially not one that wasn’t on the far edges of the country. It’s hard being in the middle. I talked to the people in charge. Asked if they had anything. Asked if we had to go through the approval process again. We didn’t. Not that it’s that hard, it’s just nice not to have to.
I looked at rescues from another group. Never did hear back from them. Looked back through Forever Morgans horses needing homes again. Looked at horses for sale online. But I kept coming back to one horse. Harvey’s description has broken my heart from the beginning. “He does ride. He is hard to catch but is good once haltered. He is afraid of people and shakes when they come near – this poor boy needs someone with patience and love who can teach him how to trust again and that not all humans will do to him what clearly was done in the past.” I wanted to try to help him, to fix him, but we had the amount of horses we could have.
Now we don’t. We have room for one more. I wouldn’t have chosen to make room this way, but we have it. No sense in wasting it. So I asked if we could foster Harvey. He is not a kids horse. It is always possible that he will be someday, but as of now he is not what we need. Coyote is doing an alright job of filling that need, along with the neighbors wonderful offer, and we will do alright without for awhile. Who knows, Harvey may be exactly what we need in the end. Onna had never been a kids horse either. It may be months before he gets here. Rusty took many months to find a ride. Hopefully it will take less time since he doesn’t have to come over the mountains in winter. And hopefully he will turn out to be the perfect horse for us, or for someone, and he can have his happy ending that the poor by deserves! 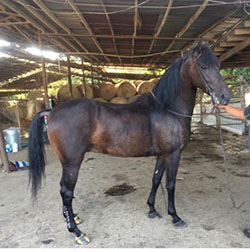 One thought on “Many Thank Yous”