Yesterday I put up the video of Harvey and Rusty grazing quietly next to the massive, noisy, horse eating hay grinder. That video was the ending. It doesn’t begin to cover the rest of the story.
As Paul Harvey would say. I miss him. His name was Harvey, just like Harvey! Just realized that. But anyway.
We brought cows home just before Thanksgiving. Just in time too. It’s been cold and snowy ever since. We wouldn’t be able to get a semi load of cows in now on the slick muddy roads.
Until Thanksgiving break ended my husband went out and did the feeding. I took over Monday when he went back to work. We, I mostly since he does not like cows!, have a very tiny herd of our own. I had seen all of them but one. I looked really hard. No sign of her. Then I couldn’t find her calf either. One cow missing out of a tiny herd hurts. Financially and mentally. She’s a really good cow, young, sweet, and always raises a nice calf. I was starting to get a little worked up.
After feeding I saddled Rusty and put a halter on Harvey to bring him along. Horses don’t only learn by riding. We rode through the slop, mud and poop, and the rain/snow, searching for that one cow. Finally, chasing a tight circle of them off a hay bale her head with the pale green ear tag proclaiming her to be number 313 popped up. I was thrilled to see her.
We went up and rode through the calves searching for her calf. The calves ran around us, back and forth, up and down, as calves do. It was a lot for both horses to take in. We didn’t find the calf. I did remember seeing one of our calves with his mama when we brought them home missing an ear tag. I will assume it was him.
By then they were well underway grinding hay. We rode out into the yard. We made big loose circles around them. Letting the horses look, listen, and settle down.We rode down wind of them and let the horses sniff in wonder and try bites of this weird hay covered snow that was underfoot. They took it all pretty well until we rode down between the hay bales and the grinder.
Harvey wants to shoot past us anyway and we were going towards home. He and Rusty kept goosing and wanting to run forwards. We made laps, stopping to graze at each end. Make it past the scary thing, get a treat. Back and forth, back and forth. Lots of grazing mixed in. Until Rusty could go on a loose rein and Harvey wasn’t trying to pass up any more than usual.
At one point I looked up and the guy running the grinder gave me a big thumbs up. He has horses. Big fancy expensive horses. I used to show with him back in the day. Not against him, he was always in the open classes. I was amateur. But we’d be at the same shows and talk. I have to say that his expression of approval made me feel a little warm and fuzzy.
I had thought, briefly about wearing the GoPro for the whole thing. The rain made that out of the question. Taking pictures was a dangerous undertaking, in the wet sitting on one hot horse while the other bounced around us. I managed to get a couple of pictures without dropping my phone though! 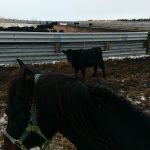 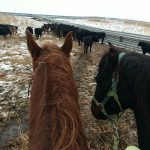 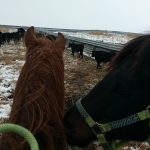 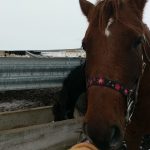 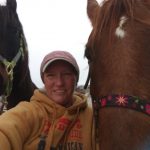 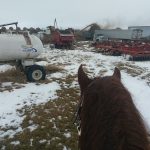 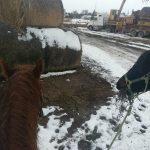 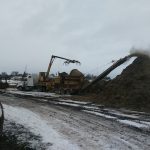