I haven’t been doing much here for the last week or so. I would like to say it’s because I’ve been so busy doing academy stuff. And I have been! But mostly it’s because it has been cold, raining, and, gasp, horror, SNOWING for the last week or longer. Sometimes it seems that the sun never really did shine and will never shine again. Snow and rain and clouds are in the forecast for the next week or longer.
The horses have been spending lots of time in the barn. I lead them to the run in shed over and over again only to have them run back out to stand shivering in the rain. I leave treat in there. I’m not hauling hay clear over there. They just don’t ant to go in. Apparently they like being locked in the other barn better.
The constant rain makes feeding difficult. Of course the cows aren’t out to pasture yet. The constant rain makes sorting and working and hauling difficult too. The rain sticks to the windows making the hay and dust stick to the windows making seeing difficult as the two ton? truck leg yields and does haunches in through the mud. Of course the windows are also fogged over because the windows have to be up to keep the same mess from filling the inside of the truck.
My last heifer that I have been waiting and waiting on finally had her calf. And she wont let it nurse. She wants him. She just doesn’t want him to nurse. I have to admit I have some sympathy for her there

😉 He’s a feisty little go getter though and isn’t deterred. Luckily because she’s kicking the crap out of him

🙁 She’s up at the barn too and has been through the chute a few times. It seems to be working now to pinch her down fairly tight in the tub and distract her with feed.
My husband has been trying desperately to get the corn planted. Not sure why, it’s not worth anything anyway. We had a couple of dry days predicted and he got the planter all ready to go. And they never showed up with the fertilizer.
So we decided to go get it ourselves so he could get started before it rained the next day. We had no sooner picked it up and where driving slowly down the gravel road when there was a loud pop. We looked around and the back window of the pickup had exploded!
Our son was in his car seat right underneath it. We got him out and looked over. Not a scratch on him! Then we stood looking at the window. An hour from home and a trailer on behind. We moved the car seat to the front seat and drove home. Glass tinkling and falling the whole time.
Once home my husband got the fertilizer loaded and started out to make a lap around the field. And it rained. Poured really.
But luckily, because it was too wet to work in the field, he got to make our daughters kindergarten program. 😏
He got the field planted a couple of days later. In the rain. Now the seed will sit there for the next week or two in the rain and snow and cold.
And all of that is why I haven’t been posting anything here! Hopefully spring will come for real and do it soon! The cows are getting cold out there and I want to play with my horses!! 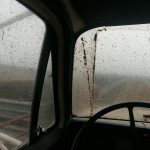 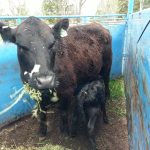 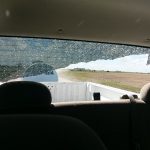 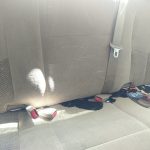 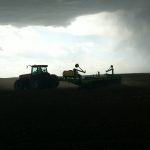 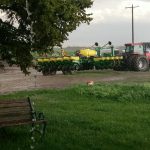 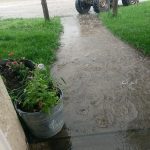 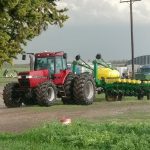 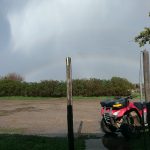 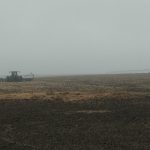 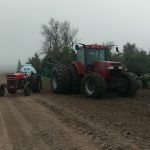 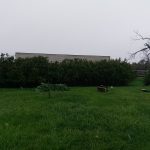