Tanna came to play this morning!
That’s always exciting. I want to ride with her, both kids want to ride with her. It’s always a little difficult too.
Today everyone got to ride!
We have enough horses. Hieldorf is coming off a small injury and hasn’t been worked with enough that I’m comfortable putting a small child on him anyway. Need to get to playing with that horse!
Rusty has reached a point in his life though that I am comfortable doing almost anything with him. My youngest could ride with me.
The oldest has claimed Harvey, Harvester she has decided, for her and Smoke is wonderful for anyone to ride.
There was only one problem.
I wanted to put Tanna on Harvey/Harvester first. Before the herd of us went out together. After a very small polite tantrum my daughter agreed to share her horse and wait to ride.
Tanna worked with Harvey on the ground a bit first. He hasn’t been touched in a good week or so. Then she climbed on and we rode around the arena a little. Harvey was doing great off the lead so we headed out to the yard.
Harvey zipped all around the yard following behind Rusty or going by himself. Until we started back and he decided he was not moving. Then it was nice to still have the lead rope on him to help encourage him to move. About the time we got done with  the ride through  the yard I mentioned to Tanna that it was Harvey’s first time out of the arena loose. Maybe I should have mentioned that sooner? 😉

Then we picked up the kids and switched horses around.
Tanna took Smoke and Harvey’s lead rope. My daughter got on Harvey and I picked up my son to ride behind me on Rusty.
We went to the mailbox and back with everyone behaving beautifully. It was so nice to be able to get out for a ride. Hopefully Tanna comes back again! 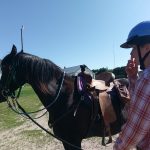 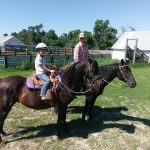 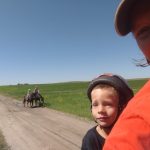 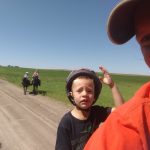 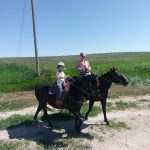 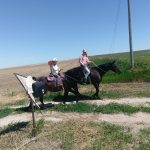