From the very beginning I thought that raising children must be like training horses. Turns out I was right

🙂
I was watching my children at one of the many activities that our lives revolve around. The parents around me were talking about life, children, everything under the sun.
As usually happens one of them was the loudest and most outspoken. It was impossible for me not to hear everything she had to share with the world.
Someone had been trying to tell her how children could be taught in a positive manner. They had said that parents should tell children what they should do instead of yelling at them when they do the wrong thing.
Sound at all familiar?
She was telling her captive audience how silly and pointless that was. She had four children to raise, she didn’t have time for that.
I laughed, on the inside, as I heard that. The child she was there with was running rampant about the area getting into no end of trouble.
It was good to see that her methods worked for her

😉
I’ve noticed much of the same thing about the people who tell me that positive reinforcement wont work for horses either. They tell me that it will create biting monsters. That horses will never behave unless we show them who’s boss and make sure we are dominant. It’s the natural way of the horse world.
So much of the time, as they are saying these things, their horses are doing exactly what they just described, no treats involved.
It can be easy to project our fear of failure and feelings of incompetence onto others. To think that if we can’t get our horse, or children, to listen using the method we are, than there’s no way anyone else could get them to in any other way.
Just because we can’t do something doesn’t mean it can’t be done, just that we don’t know how yet. If what you are doing now isn’t working take a chance, try something new. 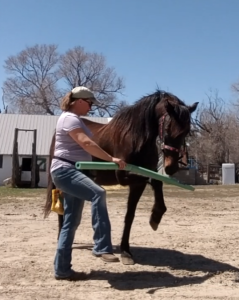