If training horses is like raising children…
Yes, children who are told no and yelled at often can be just as rotten as those who are raised in a more positive manner. Or worse

😉 (https://www.facebook.com/permalink.php?story_fbid=952096658481512&id=309985332692651) They can also be very well behaved though.
One reason for that can be learned helplessness.
Many horses can act scared of nothing, they go about life unaware and uninterested in their surroundings, taking anything their rider has to offer without questioning. This is so often brought on by learned helplessness. They learn there is no escape, no point in fighting, they give up and pull deep into themselves, plowing through anything they are ask to, numb to the fear.
This can happen with children too.
I was talking to a lady who was reminiscing that maybe they shouldn’t have been so hard on their oldest child. He had been spanked regularly for little things like accidentally spilling his milk glass at the dinner table.
I cried inside upon hearing that.
Were their children well behaved? Yes. As long as they were under the parents thumb and the learned helplessness was kept up.
Like horses once the learned helplessness is no longer maintained children can wake up, come out of it with all the resentment and pent up anger that being raised in such an oppressive environment will build. It can lead to rebellion against their parents as soon as they taste freedom, running wild and doing all the things their parents were trying to avoid with their overbearing behavior.
There are abundant stories about horses is sold, from a trainer, who carefully maintains the learned helplessness, to a new owner who was searching for that dead broke, safe, dependable horse they thought they had found. Only for the horse to suddenly start bucking and spooking at everything.
Quiet and well behaved is not worth being forced into submission. Dependability and trust are better earned through other methods. 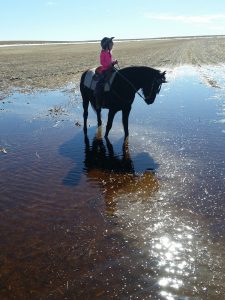