We brought the small bunch of cows home today.  Just twelve pair and a bull a couple of miles from home. All of my cow calf pairs are inn this  bunch. I like to have them in the bunch I keep an eye on, plus I get to play with Poppy over the summer that way.

I’ve received a few sideways glances for my clicker training with Poppy. No one has said anything but I sense some wonder about why. I don’t blame them.I often wonder if there’s any point. I don’t have a goal with here, we’ve done some targeting and manners training. I’m out of ideas after  that, but it’s fun to play with her.

We got to  the pasture bright and early. I drove one fourwheeler with both kids and my husband and his father brought the pickup and trailer with the other two fourwheelers. No horses this time ;( It can be  hard to make them work logistically. Children are easier carried on  fourwheelers too.

There was one calf who has been limping for the last week. We didn’t want to make him try to walk home, so we dropped a rope on him and loaded him in the trailer. He could wait there until we got the herd home then get a ride. As we worked on that the cows took one look at us and headed for the proper corner. They knew it was time and which way to go. That wouldn’t normally be surprising,  cows are very able to learn routine like that, even if it’s only carried out once a year. But this is twelve cows out of a herd of about two hundred. What are the odds of getting the same twelve? Poppy has been there before and one other of mine. The other two are first calf heifers. They had not been there. That leaves eight head that may or may not have done this before and Poppy was not in the lead.

We finished loading the calf and followed the cows to the corner. there was a little gate, very narrow and not in the corner. Also not a gate they’ve ever been out. They usually go into the pasture next door and home with those cows. The pasture was sold though and we don’t have it rented this year. They were going on their own for the first time. We gathered them into the corner and waited. That’s what you do with cows, guide them in the right direction  and wait. Yelling and running around making a fuss  only gets them worked up and less likely to find the way you want them to go and far more likely to go over fences and the opposite direction.

Nobody would step through the gate. A couple looked, stuck their noses through but didn’t want to take that step. We waited, crowding a little closer. Poppy took her turn to sniff the opening.

I had an idea.

Clearing it with my husband before breaking cow moving protocol so thoroughly, I walked around the little herd t the side we wanted them to go to. Searching through the dead dried grass I found a few blades of green, then I stood and called Poppy.

From the other side of the fence she sniffed curiously. We had brought her and ear of corn this morning. I like to bring her special treats and thought it wouldn’t be a bad idea to have her primed to come to us. What great foresight 😉 Stepping through an  unfamiliar gate was scary but she finally took that chance and licked the grass from my hand. That was all it took. As though a great barrier had been broken the other cows flowed through behind her.

I walked out of their way and stepped back over the fence to get my trusty mount.

The rest of the trip home went without indecent despite a whole field of hunters and needing to cross a highway. Now they are home where we can feed them and they have shelter for the snow that’s supposed to start tonight. Only the big bunch left to go. They will be fine in their big pasture with a creek bottom and trees for shelter. They can enjoy being wild a little longer before they come home and domesticate for the winter. 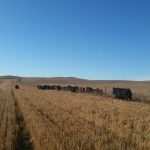 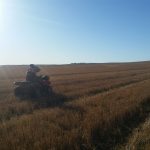 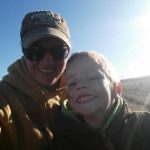 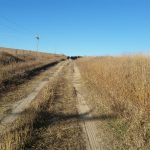 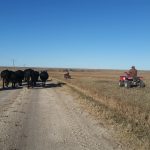