I never did put an ear tag in Booter. I don’t remember why. Probably just never bothered. I know I had planned on running them all through and giving them their shots and branding them. I never did find time for that. I probably planned on getting him an  ear tag then.

Summer is long gone and winter is coming in early this year. The bottle calves pasture is getting short. Before too long all the cattle will be home and the calves will go to spend the winter with the other calves. Right now though they needed a hay bale to make up for the grass that is getting to be in short supply. Thinking hard about it while I gave them their corn I decided they would be better off out with the rest of the cows. They would have the wheat stubble to graze and hay bales are already being put out there anyway. Plus there would be other cattle including calves for them to be with.

Before they could go though, Booter would need an ear tag.

As much of an individual as he seems here with his two buddies out in the main herd one more black calf blends in amazingly well and it would be hard to find him again. There’s a good reason people use ear tags, it’s not just because they’re pretty 😉

My son and I went out this cool drizzly morning after the calves had eaten their breakfast and walked them slow and easy into the barn. I dropped a pile of cake on the floor for them to clean up, a reward for going into the barn. Positive reinforcement doesn’t have to involve a clicker.

Opening the back gate on the chute I fed Ghost a few pieces of cake. Booter was very obliging in shoving her out of the way and barging into the chute. I fed him a few pieces of cake until he was settled down, then left a pile on the ground for him to eat while I closed the back gate. He got a little upset about that but calmed down as soon as I went back to feeding him. Now to get his head through the head catch.

It will open in allowing the cow, or calf, to push it closed as they try to fit through. He is much smaller than a cow so I was worried about him slipping right through is I didn’t get it opened the exact right size. Holding the cake in front of his nose I was able to lure him slowly into the catch. With  horse I would teach them to touch a target then reward them instead of luring with the food itself. Booter doesn’t know how to target and I’m not worried about further training implications with him so we lured, it was easiest. After feeding a few times in the catch he stepped forward far enough that I could close it. He pulled back a bit but wasn’t too upset. grabbing the tagger I put the tag in his ear.

When I pulled the tagger off the tag came too! Grrr. Looking down at the button, like the clasp that holds an ear ring on, the tagger had pushed through it and ruined my button. He had done so well too. Now I would have to go for a new button. I let him back into  the chute and went back too the house.

Returning with a large supply of buttons and a refill of cake we went to work on getting him back into the chute. It took a little longer this time but he went in. I got the button in right this time and he is now sporting a fancy ear tag with his name on it. I gave him a handful of cake and let him out. He walked a few steps and stopped to chew on some weeds. Obviously he was very upset by the whole thing.

Then I called the girls. Ghost walked right into the chute and stood happily to eat a few pieces of cake. Blossom followed her just the same.They all stopped just out of the barn to chew on weeds, then went back in the barn as I cleaned up after ourselves.

Now it was time to run them out to the herd.

We grabbed a fourwheeler and went to get the gates open. The calves jumped and bucked and ran all around on the way out. The new space was exciting to explore and they were feeling good. Out in the corral they slowed down a little but went into the herd without hesitating. No one started beating them up immediately, that was good. While cattle wont kick and bite a new comer the way horses will they will still beat up on them pretty good. When no big fights ensued I left them to settle in with plans to check on them later.

So, thoughts on teaching cattle to go in the chute using positive reinforcement. It did work good with tame bucket calves. Obviously semi wild range cattle would be different. Do I think it would be kinder to tame each individual calf down so they could be put through this way? No. I do not. Not only is it impractical, the time and effort involved in working with a few hundred head is not efficient. Also though, the stress of the taming compared to a few seconds, a few minutes tops on average of stress in  putting them through the chute doesn’t seem kinder. Bucket calves are already used to humans. The stress of taming them is usually a necessity because of a mother who wont or can’t raise them. Healthy calves out with their moms are left alone as much as possible in general. We want the mom  to do her thing and raise her calf naturally. We try not to get involved.

Yes, we should work with herds to get them used to humans and quiet to walk through and work it makes their lives and ours much easier. Making pets of the whole lot of them is not going to happen though. In the end I was very happy to get to do some training on Blossom and Ghost on going through the chute, letting them see that it wasn’t a big deal. Hopefully they will be sticking around as heifers. Many people do run their cattle through the chute once without any sort of work or catching them as a training procedure. I think that that is the most practical way to go about the training of many cattle.

I’ll be keeping a close eye on them out with the bunch, I worry about them with the big girls. This is worse than sending children off to school! 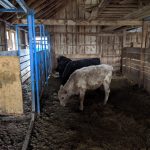 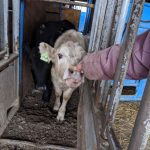 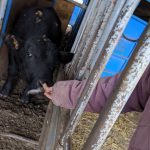 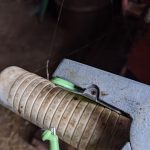 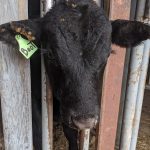 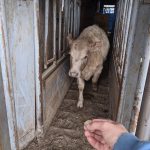 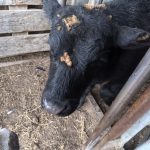 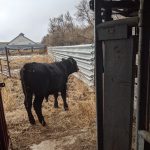 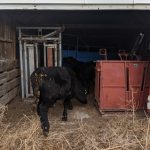 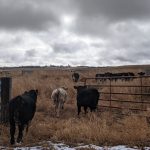 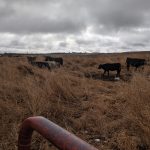