Seldom does it work out so perfectly.
I wanted to make a video showing a certain way to teach a horse to lower his head and relax. It wasn’t what I was aiming for when I started working with Harvey but soon opportunity presented and I had to take advantage.
We were hanging out in our ‘arena’ when we heard a noise. Harvey’s head went up and he was on high alert. It grew louder and closer as we looked, quivering, in that direction.
Soon a flat bed pickup appeared coming down the driveway. I think there was a generator running in the bed to add to the roar of the diesel and the front bumper hung drunkenly off the front dragging in the road ahead as it came.
In the pen the other horses took off running. Towards the scary noise. Harvey trotted off in that direction too.
He was loose, as usual, working at liberty. I imagined him running off chasing the pickup down. Doing his beautiful bucking, snorting, running around like a beautiful idiot thing in front of these strangers. Me following along to collect my lost horse.
How embarrassing.
But Harvey stopped when I called. He wasn’t coming back to me but he stood there, head high, ears pricked, staring intently.
That was when I remembered the calming cue goal.
Walking up to him I stroked his neck. He stood trembling a moment. Then he lowered his head!
It had worked!
He wasn’t calm yet by any means as the pickup made a few laps around the yard rattling and clanging, broken bumper leading the way.
He stayed with me though. I stroked his neck he dropped his head. Gradually the head dropping stayed longer and longer. Eventually he turned and followed me back.
I had gotten it on camera! The perfect example of the trick at work in real life circumstances. It was so exciting!
In the house again afterwards I hurried too get the video transferred to my computer to watch it.
And.
He had smeared the lens completely when he decided to eat my GoPro earlier!
So close and yet so far. Oh well. It may be worth using even with the blur.
The pickup? It was the local co-op coming to do a soil test. They were lost inn the yard trying to find a way out to the field that wasn’t blocked by snow drifts. Not a big deal, just noisy 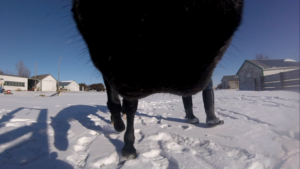 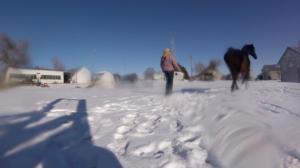 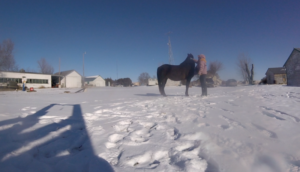