The calf lay alone on the hillside. Still and quiet he hid as baby calves do. Never moving except his eyes as they followed me around. I needed his mom though.

Stopping the fourwheeler I stood over him, trying to get him to stand up on his own. He was too well trained though and flopped right back down despite any attempt I made. Giving up I stood, stretching my back sore from the bending.

“Here cow, come here cow! I’m eating your baby!” I yelled towards the cows grazing in the distance.

Like deer, cows will hide their babies and leave them for hours on end as they wander about grazing. They know where the babies are though and are keeping an eye and an ear out for trouble.

Sure enough a head soon topped the skyline. Ears up and eyes wide, the expression of a cow that’s not happy.

I hopped back on the fourwheeler.

Backing away I gave her time to get him up herself. He leapt to his feet at a slight urging from  her and went looking for milk. It was time to ask them to move.

A calf will follow its mom beautifully when wanting a drink and I needed to get them into the corrals, to better shelter, before the storm blew in. I edged the fourwheeler slightly forward.

Her head shot in the air again with that I’m going to eat you look in her eyes. Then head dropping to the ground she started pawing. This wasn’t going to be an easy move.

Trying to keep her calm, a lost call from the beginning, I edged a little farther forward. She charged. Grabbing for the break I hit the gas instead. We collided head on.

It was enough to get her to move though.

As soon  as she started walking I quit moving. Moving cattle is all about negative reinforcement. We apply pressure. When they move away the pressure is released rewarding the behavior. I was thinking hard about that and trying to remove all pressure, reward her the best I could for walking instead of eating me. Only when she stopped would I apply more pressure, move closer. She would shake her head at me and paw a little but moved herself and her calf through the gate into the corrals very nicely.

I go the gate shut behind her. Into one section of corrals, it was the first step done but quite a ways to go still. Then she found the feed bunks full of ground hay and corn for the calves. She didn’t see any need to go farther.

I was willing to play with her a bit out in the open space of the pasture. In the tight closed area of the lane not so much. With no where to get away to I wasn’t going to risk her rolling the fourwheeler or coming over the top of it. I have nothing to prove and no fear of being called chicken. I am chicken. Nothing to hide there.

I sat behind her hoping to bother her enough that she would walk away from me. No luck. She would look up from her feast once in awhile, give me a dirty look and go back to it.

Getting bored waiting I stared into the distance beyond her.

A movement caught my eye. Something was crossing the wheat field clear across, a good half mile away. Something smaller than a deer. And black? As I watched it went quickly down the hill. Nothing slow and meandering about it. What could it be? A coyote? Pretty dark for that but possible. A skunk? A badger? It was driving me crazy wondering. It  was halfway across the field now and still going quickly along.

Not getting anywhere with the cow anyway I decided to leave her where she was. Maybe she’d go down the lane on her own. Gates were open, and closed depending on need, to get her to where she needed to be if she would just go. I zipped arund her and went to see what was going down the hill.

Flying as fast as I dared across the field I came to the place I was sure I had seen it last. Nothing was there.

Stopping the fourwheeler I looked closely about me. There, out inn the alfalfa was a black spot!

This close it looked the same size it had from way back where I had been. From here though I could tell that it was

A big black cat crouched out there in the alfalfa hiding from me the same way the calf had. Not a muscle twitched. Nothing moved except the eyes following me about.

Curious I walked over to it.

As I approached it leapt up and took off running across the field and was gone. 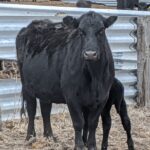 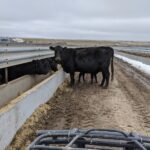 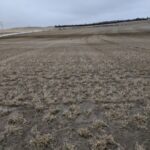 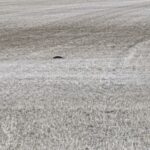 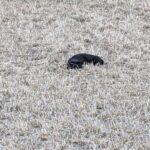 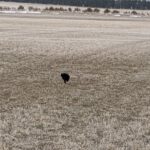