At least it wasn’t snowing. Much. That was something.

It was cold though, bitterly so.

I was finishing my lap through the cows. Nothing was going on. The one calf who had been  born after we brought in the others was up bouncing around. The cold wouldn’t bother him any. The cow who had lost her calf as a preemie wasn’t looking good. There’s some infection in there by the looks of it. She’ll need brought in and doctored. As soon as it warms up a bit.  At this point waiting one day wont hurt her any worse.

As I turned to glance one last time behind me I spotted her. Somehow missed as I went by earlier she was easy to see now. Marked by the bright red cleaning trailing behind her. There was a cow with a new calf back there. I turned the fourwheeler around and went back to find it.

At fist I thought he was dead. Tiny and immobile, he lay in a dip in the frozen rutted ground. She stood over him. She may have been licking him to clean and warm him but stuck in that hole, sides worn slick from his struggles, it was hopeless.

Then I saw a movement. However slight it meant hope.

Pulling up to the calf I got off to see if I could pick it up. Mama said no. I hurried back on the fourwheeler.

I could try to drive home and get help then come back. He was nearly dead though. I didn’t want to wait that long. I drove between him and mama, she came around to the other side of the fourwheeer.

I put it in reverse, for a quick escape, and reached down to grab a leg. That put me and mama eye to eye as she screamed in my face. I sat back up. The calf had to be gotten up if he was going to have any chance though so with a deep breath I reached down again.

Ignoring her face next to mine I grabbed a leg and yanked with all my might. He slid messily across my lap. I floored it backwards. The mom followed bellowing.

Now to get them both to the warm dry barn. For now though I could feel the embriotic fluid combined with the mud he had been born into soakinng into the entire front of me. This was going to be a wet trip.

There was a close gate with a straight shot to the barn. I had no way to open  it though. Or I could go clear around the corrals and maybe be able to get the electric fence gate from off the fourwheeler. And maybe catch my husbands attention too. He had been giving the calves some extra feed in the cold weather while I checked cows. Cresting the hill I started waving at him where I could see him waiting for me way down at the quanset.

He turned and walked inside. Good. There was hope he had seen me.

Pulling alongside the electric fence gate I tried to unhook it. The wire was too tight. Fortunately there was a  fourwheeler coming down the drive. He had seen me.

He opened the gate and I drove through hoping the cow would follow like she had been. She turned back.

He went around and tried to push her. She said no. We left without her. The calf needed to get to somewhere warm. We’d come back.

Speeding down the driveway towards the barn the cold air blowing over my soaking wet knees I pondered the likelihood of frost bite and whether it would be better for the calf if I went slower. I decided a short amount of colder time was better than a longer time of not quite so cold.

At the barn we drug him inside. I started rubbing him down with dry hay as my husband ran for the heater. Then we put him in a big barrel and turned the heater into it full blast, something to hold the heat and concentrate it around the calf.

I ran to find colostrum. Apparently we were out.

Back at the barn my husband ran up to his parents house to see if they had any. They were better supplied! He came back and said that his sister was getting it mixed and would be down in a minute.

It was quickly getting dark out. Impatient with the waiting I said I’d go start getting gates open, or closed, to create a clear path to bring the cow up. By the time I started searching through the herd for her the headlights of a fourwheeler were coming through the gloaming.

We searched he found her. She and two other cows ran for the gate. There was no turning just the extra two. Better too many and the right one than to lose them all. We followed them down  the dark lane towards the barn.

They were off and running. In the bigger corrals just before the barn my husband turned one back, then at the last second going into the barn corral he got the other sorted. We slammed the gate shut behind the one we were after. The others could wait there.

Fully dark  now the pen was lit by a light in the barn and one outside light on the far side of the corral. The gate was open but it was a small area since the gate into the barn was closed. She was going the right way despite the difficulties. I followed her, easing her in  the right direction. She was going straight into the gate. My husband pulled alongside me on the other fourwheeler, ready to shut the gate behind her.

She hesitated, but we had her. The she turned and jumped. Right into the edge of the gate. She penned herself for a moment between my trusty mount and the gate the leapt. Over the front rack of my husbands fourwheeler! It was the only way out and she was determind to take it. With a crash and banging she smashed fourwheelers and gate and was gone.

We sat a moment gathering our scattered wits.

My husband supposed she had broken his headlight and reached up to check it. Sure enough the headlight, set between the handlebars, well up on top of the fourwheeler was smashed. I was thankful it wasn’t anything important. He disagreed about the importance of it. I was just happy it hadn’t been him. Working cows in  tight quarters on a fourwheeler is dangerous. They are unweildly to maneuver and a cow can  flip one or go over the top of one easily enough.

He took mine, still in possession of its light and went to put the extra cows back. I went to get the calf his colostrum. The cow could sit and maybe cool down a bit.

My sister in law was rubbing the calf frantically trying to get circulation going. I poured the colostrum into the tuber and began work on getting food into him.

Calves in really bad shape like this wont just nurse. Trying to feed them with a bottle is hopeless. Putting a tube very carefully down their throat and putting the milk directly into their stomach is often the only way to help them. It is tricky work though. The slightest mistake and you are pouring the fluid into their lungs instead. Killing them instantly or leading to pneumonia and a slower death.

He was still breathing and began uttering soft moos as we worked though. We hadn’t messed up.

After the bottle was empty we moved him to the other side of the barn on a soft warm pile of hay  and went after mom. He was mooing loudly now, hopefully that would help lead her into the barn.

The three of us went out to try again. She still wasn’t happy to see us.

We stayed next to fences, spending most of our time on them as she came near. Again and again  she’d get close to the gate only to say no. There was no way she would go in.

My brilliant husband decided that maybe it would work better if we tried a different rout and opened another gate. She ran right through that one. Yay!

Going around that way we could run her through the chute that we brought calves in to work them. She went easy as could be. In the gate, through the alleyway, it was going perfect.

Last fall we had narrowed it up as much as possible to keep the calves from turning around and getting backwards as we ran them in for fall shots. Now she was stuck, hung up by her hips in the narrow place. The last thing we wanted or needed after all the trouble leading up to this point.

She was stuck so we opened the big gate out the side, freeing her front half but not the hips, and went  to work. The pressure of her width against the panel wedged the bottom pen in place preventing it from being pulled to make it wider no matter how hard we hammered on it. The top one could be pulled though letting the top open up. Now if she would just stand back up. No  one was willing to stand next to her and encourage her to do the thing that would set her free right next to them.

We shut the big side gate and I tapped her on  the nose with my paddle. She got mad again and fought but didn’t quite stand up. I tapped her again. She bellowed and fought and was free.

She ran out around the corner to her calf.

We left them in peace. There was nothing else we could do to help. It was up to her now to lick him and get him going. Only morning would tell us the outcome. 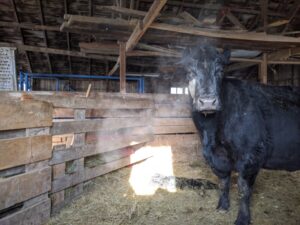