I’ve been sharing stories of mad cows and dying calves. Those are the exceptions, the odd ones out that make for a good story. I feel like I should tell about the norm too. The way life goes on that isn’t exciting or sad.

Yes, a few of the cows will get upset and want to fight, some calves will die, it’s guaranteed every year, there will be storms, there will be heart break. Mostly though the cows spend the winter out on  the small home pasture. It is similar to a sacrifice area people have for horses. A small place to confine them to protect the larger pastures. Only a small portion f it is actually ‘sacrificed’ though, up around the corrals and behind the windbreak. The places where we feed in storms or when it’s really muddy. The rest gets grazed hard in the spring, during calving, but is otherwise a healthy native grass pasture.

At a quarter section, 160 acres, the cows have plenty of room to roam and hang out with the other cows. We also open up the fields at different times for them to graze the cornstalks or winter wheat. They don’t ever have the full section to graze at once because we rotate but there is lots of room.

We try to stay out of their way as much as possible. Ideally the cow will have her calf and raise it completely on her own with no interference from us. In late spring we bring them in for shots and to be branded. then they get shipped out to pasture for the summer.

Beef cattle are very different from dairy cattle. We breed for a strong maternal instinct, we want the cow to fight off predators and to claim her calf. That is part of the reason they will fight sometimes when  we try to bring them in. Yes there are ways to avoid this, more selective breeding and handling or training. It’s not usually a problem though. Dairy cattle have been bred for a very long time not to have the strong maternal instinct. They don’t care about their calves. Isn’t it amazing what can be bred for?

Sometimes even with all the careful breeding a beef cow will still walk away and leave her calf or kill it outright. Between that and watching for any that have problems calving or calves born in bad places, we check the every few hours through calving.

Some may wonder why, when I have so many horses that need ridden, I am so often mounted on a fourwheeler, quad, whatever you want to call them, it’s all in the vernacular 😉

As I mentioned, the pasture is fairly big. It takes awhile to ride over, I can’t carry small children on a horse, when it’s miserable outside a fourwheeler can go faster, when I’m already out there with the fourwheeler feeding its harder to go back to the house, saddle up, then get back out there. It’s all about speed and convenience. And children. I ride out when I can. With the children home, when the weather gets decent again, I’ll start trying to ride out with one of them along.

Now for updates. The cow that was mad about coming in that I left in the lane with the feed bunks. I came out later with my father in law and he went head to head with her all the way down the lane. We got her into the other corral with the other cows and calves and they weathered out not blizzard very well. Lots of hay and straw to bed down in and a barn for the calves.

The cow with the frozen calf that also didn’t want to come in. The calf was in really bad shape when we brought him in, we have to try though. It was hopeless from the beginning but we always do everything in our power to keep them alive. Not for money, anyone in agriculture can tell you that even though the stores can’t keep our products on the shelves we are going broke because neither cattle nor crops are worth enough for us to break even.

The calf was dead by morning. He died with his mom by his side, warm and dry. There was nothing else we could do for him. There is such thing as a good death and a bad death. A baby dying before it has a chance to live is a bad death. Living a full and happy life then dying to provide food, medicine, clothing, every part of a cow is used, nothing wasted. That is a good death. 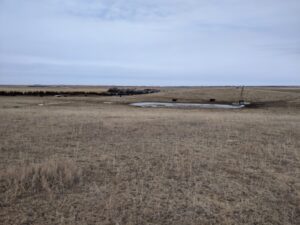 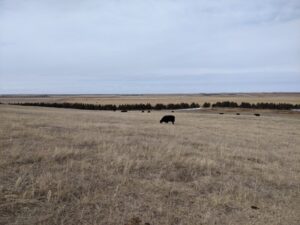 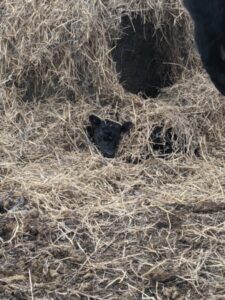 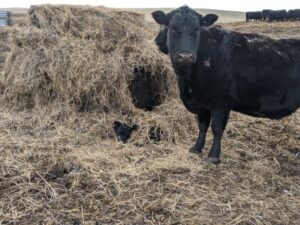