Or not. Almost though, in  name if nothing else.

We went out to check the cows. One of our cows had a calf. It was up and standing next to her trying to nurse. We left them alone to do their thing with out getting any closer and bothering them. I would come out later and give the calf his ear tag so we wouldn’t confuse him with any of the other solid black calves.

When we came back the cow was no where near a calf and had no interest in looking for a calf. We went searching for her if she wouldn’t do it.

We found a calf who was hungry and searching for a mom. He hadn’t eaten in so long both sides of his belly were nearly touching in the middle. I thought this must be the one! Was she not letting him nurse? Had she not claimed him? Better get them brought in.

First though, the oven  needed shut off. Not having anticipated being out here this long I had started supper before leaving the house. It would be getting pretty crispy by now.

My husband had gotten home by then and came back out with me. We started pushing them both towards the gate. Both of them were willing to move, willing to move together even  but she still had no interest in him. My husband stopped and shut off his fourwheeler. Do you think that’s her calf he asked?

I shut mine off too and sat pondering the question. She showed none of the usual signs of having given birth recently, she was fat still, had no cleanings, and her tail was shiny clean. The only reason I had to think there had ever been a calf was seeing her with it earlier. I began to doubt what we had seen. Had we really seen a cw with her own new calf or had we seen a cow standing in the pasture next to some random calf?

We decided to leave her and him and see what was going on in the morning. Maybe he would have found his own errant mom by then, finally beginning to miss her calf as her udder got full and sore.

The next morning as I drove by with feed I thought I saw him laying there and was sad he hadn’t found his mom. When I came back for a closer look though all I saw was a cow with one calf nursing while she licked another.

How exciting. Unlike horses cattle can easily carry and deliver a healthy set of twins. They can’t usually raise them well by themselves but it gives us an extra calf. If another cow looses her baby we can take one of the twins and give it to her. The mother of twins wont miss one and the other cow will be thrilled to have a calf again not caring too much that it isn’t hers.

Looking around for the calf without a mom though, I couldn’t find him. I looked closer at the ‘twins’ and realized that although the calf she was licking was brand new the one nursing was not. One of our twins was the motherless calf from  yesterday.

She was letting him nurse though so even if we would have to bring him in at least he was getting one good meal. I locked the gate to keep other cows out and her in with her pair of calves and left them.

All  day and that evening, as I checked them carefully to make sure her new baby was getting his fair share of milk and the older one was still able to eat, she was keeping a close eye on both of them, mooing softly when I got near. Apparently she was claiming both calves as her own!

Often cows will walk away and leave one of her own twins. This cow had adopted a calf that wasn’t hers and was keeping a close eye on him. To help her out with that job though it would be good to keep them separated from the rest of the herd. Luckily we had an empty pen with hay already in it where I could also feed her a little extra with two mouths to feed. I moved her across the alley way to her pen and there she and her babies sit. All the food she can eat, lots of room for them all to roam and a mom just perfect for the abandoned calf.

We will never know for sure where the calf came from. He could well be the calf of my cow and she just isnt interested in raising him this year. We’ll know for sure if she has a calf for real.

He was very tiny with weak curvy hind legs. Half the size of his slightly younger adopted brother. It’s very likely that he was actually a twin but his mother abandoned him. They are hard wired to keep track of one calf, two is often more than a cow can keep track of on her own.

Wherever he came from he has a mother who is doing her best to raise him now. There may come a time when we take him away and give him to another cow to raise. One cow has a hard time providing enough milk for two calves to grow big and healthy, he would be better off with one mom all to himself. Until or unless that happens though this is the best possible thing that could have happened to him.

What a great cow 💜 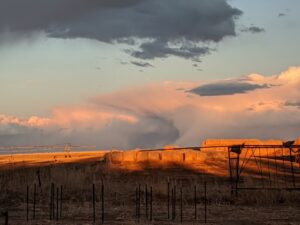 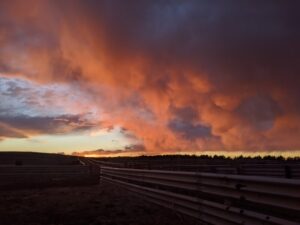 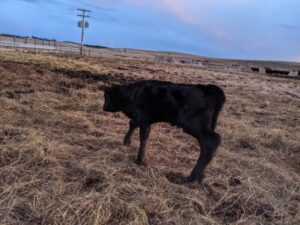