People always want to know if they HAVE to use food to train their horse if they are going to use positive reinforcement?

Technically the answer is no. A reinforcer does not have to be food. All it has to be is something the horse finds rewarding. Something that they are willing to work in order to receive.

In the spring when winter coats are shedding my horse is far more interested in scratches than treats.I offer food and Rusty moves up to position me properly at his itchiest spots.

We can take advantage of times like that to teach certain tricks that are easier taught with that reinfrcer. Asking a horse to step over to you for example. Give some good scratching then step away a small step. When they move towards you go back to scratching. They learn without even trying. Start adding a cue and you have it down!

When the green grass begins to grow and there is nothing else a horse can  think about, cookies aren’t able to compete. I spent way too much time this spring trying to feed store bought treats before it occurred to me that we were walking through a plentiful supply of free reward. A treat bag stuffed with handfuls of grass is far more interesting.

Even using grass as my reinforcer I can’t compete with free grazing. Before working with the horses I try to make sure they get plenty of tie out eating the grass before we try to work. The horses don’t have free access to the grass. They would all be fat and foundered if they did. Letting them have enough to take the edge off helps them to think  about something besides eating, while I train them by letting them eat 😉

There is a difference between offering food that they want as a reward and trying to keep their attention on me instead of the grass we are working on top of though. I’ll be happy when the new wears off and we can go back to the calm  ropeless sessions we are used to. Until then I will be walking around with grass sticking out the sides of my treat pouch like an over stuffed scarecrow.

On the other hand, if they’ve been out eating grass for a few hours they will sometimes turn their noses up at my offering of grass, preferring the hay pellets. What is rewarding to the horses changes constantly and we need to be aware and able to change with them.

There are other things that serve as reinforcers too. Traditionally stopping work and turning a horse loose has been used to reward good behavior. There is a fine line between reward and negative reinforcement in some cases. When we remove something they don’t like, riding in some cases, that is offering relief. Relief is not strictly a reward, it is a reinforcer though. It increases the chances of the behavior happening again.

It often works well to stop what you were doing and just hang out as a reward. Especially if grazing is included in that. Stopping work can also be a punishment though. When the horse enjoys what you are doing and you stop that is not reinforcing the behavior you wanted. Mine will often be confused and go back  to what we were working on looking back at me as if to ask why we stopped the work they had been enjoying so much? 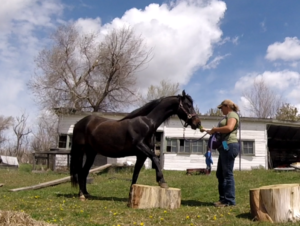