Many years ago I was on a trail ride, a big trail ride. One of those week long ones with hundreds of horses and riders. Sometimes along the way people needed a lost shoe replaced or other farrier work done.

One evening we were standing around watching a farrier re-shoe a horse, talking and hanging out. Apparently there wasn’t much else going on that evening.

He had his small daughter along, sweet and cute, we were talking to her too.

They each had a story to tell. The differences in their stories were heart rending.

The farrier told of how not too long ago his daughter had been life-flighted to the hospital after her pony had kicked her in the head cracking her skull. He swore that pony had turned and looked at the girl before carefully taking aim. He had hauled it to the sale. No way was he keeping that thing around after it purposely tried to hurt his child.

Nobody blamed him for that.

Seeing your child near death with a skull fracture would have to rank high on the list of the worst things that could happen.

The sweet tiny child said that her dad had taken a baseball bat and hit the pony until it died.

Looking back I’m not sure how she would have known that, not with the time she spent in  the hospital. At the time it made perfect sense. A beloved child, a viscous pony, and a story that could be told publicly without condemnation while quietly covering the truth of an act done in rage and anguish.

Yes there are lots of reasons the terrible accident could have happened. Yes, the whole thing is terrible from every side.

The love of a parent for their child is the point of the story though and the importance of choosing carefully when looking for a horse for children. Also the importance of teaching children to be kind and polite when dealing with their horses. So often we see children  doing things that could and should cause them to be on the receiving end of a kick or bite.

Introducing our children to horses is the best thing a parent can do. It is as exciting for the parent as for the child. It can also be one of the most dangerous things we can do. We need to be sure to take the time and do it right. 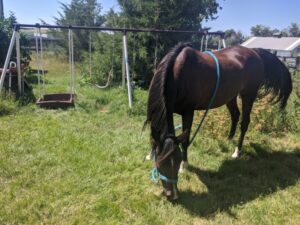