Respect
/rəˈspekt/
noun: respect; plural noun: respects
verb:
1. admire (someone or something) deeply, as a result of their abilities, qualities, or achievements.

I was at the local coffee shop the other day. There was another family in there, the mother of the family has a reputation for being, if we are polite we would call it straight forward, to the point, and abrupt. If we are being honest we would call it mean. Not to her kids, or at least not any more to her kids than she is to the rest of the community.

The barista went to school with her daughter and they had been chatting.

Something was said that the mother misunderstood as being about respect. She said a few other things but the part that stuck with me was that she thought the young woman had always been afraid of her in school and because of that had always respected her.

I sat looking at her thinking about that and about how it applies in the horse world too.

Like her we yell. We chase out horses around and micro manage their every move. We wonder why our horses don’t want to be near us and wont let us catch them. Then if they don’t do exactly as we say we jump all over them, move their feet, make them ‘respect’ us. What a sad life it must be for her to have to constantly fight and worry that people won’t accept her and listen to her if she acted any other way.

Respect has to be earned it can not be forced and is in no  way related to fear.

That horses are unable to feel respect according to any of the definitions has been well discussed, if not agree upon by everyone.

Let says that horses could feel respect though. If we are trying to get our horses to respect us are we using fear tactics like this lady? Are we confusing a quick scurry to get away with a desire to do as we ask and work together in mutual respect?

So much horse training is based on fear. The fear makes us feel safe and comfortable, and as though we were getting respect. Like this poor lady in the coffee shop are we confusing fear with genuine respect? 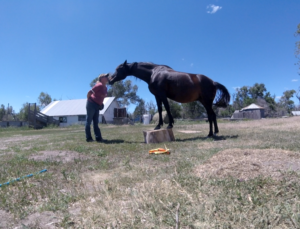