The weather has been getting colder. We had a small snow, just enough to settle the dust. Then good weather, enough that they could get most of the corn combined.

Then came freezing drizzle and rain. They worked late into the night as the weather rolled in. Hauled corn to the elevator until they closed, then filled the grain trailers. Once they were out of storage and the drizzle began they squeezed the trucks into the quanset and finally quit for the night.

The cold weather stayed and so did the ice.

Summer is over and gone. We take cows to pasture a little latter then most so they come home a bit late too. With no rain this summer and little moisture at all since last fall the grass is well used and if not completely gone then almost.

It was time for the cows to come home.

The only problem was the corn. And the cold.

They tried one more time to combine but ice was shucked off the ears along with the corn. That wasn’t going to work.

We would bring the cows home instead.

It was cold. My husband and I got on the fourwheelers and drove the cows down the road. There are no pictures because it was too cold. My fingers were numb, my cheeks tingling from the cold. Children were tucked in behind us out of the wind. Still our son called it quits and went to ride with my husbands father in the nice warm pickup, following behind happily honking his horn, sure that it was helping.

Our daughter stuck it out. So proud of her.

I figured out how to turn on the handle heaters. It didn’t seem to help a lot until I insisted on changing mounts with my husband so he could warm his hands. After some time spent on his fourwheeler without heated handlebars I realized what cold really was. My hands ached from the cold and I begged my daughter to just push the throttle for a few minutes while I tried to work feeling back into my thumb.

Why are fourwheelers made with only one spot to push the throttle? So only one hand is stuck in that one position unable to move for comfort or warmth? I was desperately missing the horses.

We finally made it home. I took the kids inside so all of us could thaw. Nice and warm from his ride in the pickup my husbands father had lots more he wanted to do. They went off together into the cold and eventually to the combine. No more than a few rows into the standing corn the snow started. Light at first. The ice had melted enough to fall off but soon the snow accumulated enough that the harvest was forced to a stop again.

This morning there are many inches of dry powdery snow on the ground. It’s cold and when the wind starts the snow will blow into a beautiful ground blizzard. The last of the corn will be in the field for awhile but at least the cows are home where they have shelter and plenty of feed.

Now for the rest of the cows… 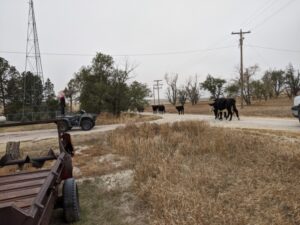 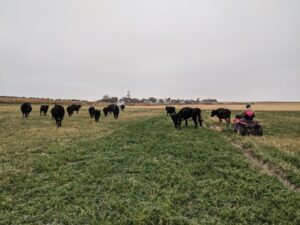 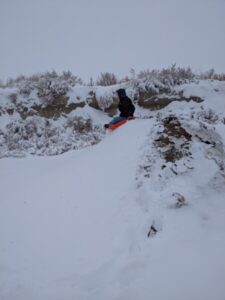 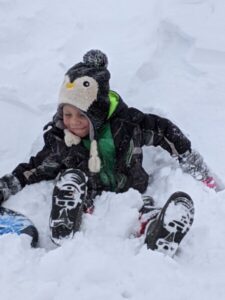 One thought on “Change In Weather”