Spring is come. The grass has been green for awhile now. Growing as much as it will on a year with no moisture to bring it up. It’s time for the cattle to go out to pasture.

We run on average about a month behind the usual schedule, the one that’s normal for most cattle people in the area. It works for us. The corn gets planted, the cows eat hay, the pastures have a chance to grow. In the fall we leave the cows out later too. There’s still grass to feed them and we don’t have to start feeding every morning until later. It works.

Every spring the fences need gone around. Make sure snow banks haven’t flattened miles of fence line. Repair the damage done by antelope and deer and elk over the winter. Keep up with normal wear and tear from cattle and age. It’s long, hot, boring work. Slowly covering every drop of fence line. Checking each and every post for missing staples. Patching and stretching loose wire as you go.

The pickup growls as we cruise through the pasture. Its big engine wanting to be free and roar down the road instead of idling along. Its impatience with the job builds as it guzzles gas and roots at the bit. A fourwheeler would be easier on the pocket book and get around the pasture with less jarring of my back. The steel posts bouncing in the back clanging against wire, fence stretchers, and the heavy post driver require more carrying capacity.

The ceaseless wind sings as it howls through the wires and cools the sun peaking through fluffy clouds. The clouds hint of possible rain, then laugh as they pass us by to give much needed moisture elsewhere instead.

My dog is happy to accompany me. She rides in back getting out when I do. Laying in the shade under the pickup or sniffing after scents only she recognizes. Like me, there’s no where else she’d rather be. Streaked with dirt and sweat, sore from the work and the rough ride, my muscles ache but the ache is of god use and ability to get the job done. The tired is well earned, the dog and I will both sleep well tonight. We know our worth and our ability. Neither of us is thought any less of for being female. We are simple good, capable workers.

The wide open empty prairie doesn’t care about sex. It only cares about strength. The weak it will smash, blow away with the ceaseless wind and glaring sun. Still happy to push anyone to insanity who can’t take the emptiness and being alone.

Arms straining, using balance to make up for a lack of brute strength I heft the pounder over my head and drive another post. The ground is soft but there is still satisfaction in a blow that drives the post halfway in the first try. Pausing to catch my breath and admire the sweeping views over undulating hills I think that there is nothing I would rather be doing. No cushy job that could take the place of open empty country and good hard work.

Post set, wire clips on, my dog and I climb back into the pickup and creep down the fence to find the next place in need of repair. 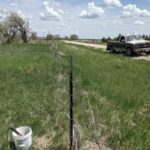 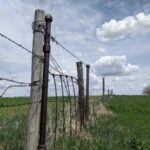 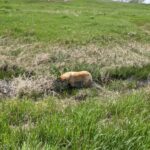 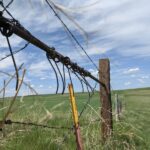