A good friend and I put on a trick training clinic last week. I’ve been meaning to write about it ever since. Haven’t had time to come up for air much less have time to write though.

I had agreed to do it two years ago. Covid got in the way last year. This year camp was a go and the clinic was back on.

My friend Heather agreed to come along and help me. Without her it wouldn’t have worked. We split the groups up. She taught one trick I taught another. Between us we were able to give people almost enough attention to keep them interested. Her better than me. She was great at in person training. Not so sure I am.

Rusty and Heildorf came along and gave a demo as we got started. As soon as we unloaded they were set upon by nose flies. Again! I couldn’t believe it. They usually only last a week. Of course both clinics would fall in that week. Between that and the new place Rusty was crazed. Head in the air he bounced around, reverting somewhat to his old running people over self. I tied them both to the trailer and got the scarf I had along to do ‘sneeze’. Draping it over the nose band of the halter I used it to cover his nose and keep him safe from flies.

He looked like a lovely harem girl but it calmed him down enough that he was able to focus. We did some practicing. He remembered he was a big boy and had some education. Fortunately. A whole day like that would have been awful. I was called over to the arena so they could introduce the clinicians. His nose protection had to come off.

While there I talked to a lady who said she had some insect wipes that did a pretty good job with nose flies. She’d drop them off for me. As I walked back to the trailer the first group followed me. I was totally unprepared. Forgot my chicken and my handkerchief/nose fly protection. There were tons of people in the first group! Or it seemed that way as I tried to start. Remembered all I hadn’t loaded up with. Tried to remember what I had planned to say anyway.

Somehow we made it through. Not sure how or what I said. Fortunately after that Heather got there to help me out. Also after that first great experience I remember to stuff my pockets with rubber chickens and handkerchiefs. Such important training tools 😉

My main take aways from the whole hot, windy day were the number of people who had no problem at all with feeding their horses treats. We are in far western Nebraska. This is ranch country. Some of the people there lived in town and had horses they board somewhere. Most of them were ranchers. That means cowboys. There is a bit of a reputation that goes with that of being rough with horses. People like to say mean things sometimes, especially in clicker training circles.

Out of this whole bunch, almost seventy 4h kids actually entered in the camp and any accompanying parents, there was one family who said they “didn’t want to ruin their horse, he’s a ranch horse” about feeding treats. I’m sure there were others. They quietly drifted away though, to sit in the shade or find things that did interest them. That worked out perfectly. It gave us more time to concentrate on the ones who were interested. The ones who had already taught their horses a few tricks, the ones who wanted to learn how to teach a trick, the ones we may have been able to plant a seed in that will begin to grow when they are ready.

One delightful grandma, there with her grandchildren and obviously an experienced horse woman, asked Heather why I was telling people to use scratches instead of treats? When told that many people didn’t like to hand feed horses, she scoffed. “Why would anyone worry about something like that?” They fed treats all the time, she couldn’t believe there were people who wouldn’t. That did prove to be true throughout the day. Hand feeding wasn’t a problem. Tricks weren’t a problem. The only problem was time to get to everyone. Time to get the idea of what we were trying to do across.
I had planned on trying to push the idea that we use the same training we use for tricks no matter what we are training. Not sure that got across. We may have some horses who pick up their feet better than they did before from our work on the simple bow.

I know we had many parents who got great photo opps from Heather’s work in teaching hug. Those parents quickly understood the purpose behind it as they rushed to get pictures. Oohing and awing over their children and horses.

By the end of the day Rusty had had enough. He was hot and bored. He was done roping, he was done Spanish walking. Our demo was fairly well pointless. Which is unfortunate because the last group of the day were the ones who really got the idea and managed to teach the basic tricks best of all. It might also be that Heather and I were reaching our stride and getting the idea of the teaching down pat. It was more likely that it was the oldest group and they were able to do the training. There were a few girls who had a simple bow down by the end of the day! 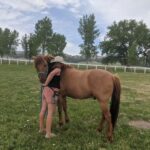 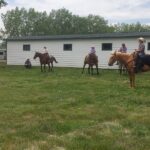 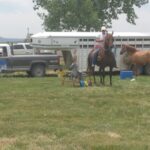 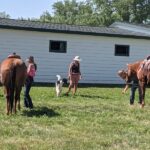