I go tasked to do a little clinic for 4h. I love the idea of 4h, even if I can not figure out how to do it for anything. So I happily accepted.

The day of the clinic dawned HOT. I was sick to my stomach, because having to do anything with, or especially in front of, people makes me so nervous I can hardly stand it. The pickup with plenty of room and air conditioning had broken down the day before.
We squeezed into the front of the trusty old single cab pickup. It roared on down the road, happy to be out of fence checking duty.

At the arena with time to get the one shady spot, set up, and get the horses used to the new place we waited.

In no time at all pickups and trailers started pulling in. Not a large number but a good amount for us to practice in front of for our big clinic coming up in a couple of days!

Children, big and small, new to horses and life long riders came leading their horses. A local horsewoman who is very active in local horse activities and a great roll model to the youth in the area came with her husband. She is a great person and a great friend, I was happily surprised to see them pull in.

We got down to business.

I had been practicing a routine at home with Rusty and Heildorf. Last month. Before kids got out of school, cows needed to go to pasture, and summer activities took all my spare time. We’d had two times to go through it in the days before the clinic. I found many places where my mind went completely blank. I took guesses and forgot my balloon popping on the bridge altogether!

Oh well. They were forgiving. Now we have two days to practice before we do it in front of much larger less forgiving groups. Gulp.

After the demo we got started. The official theme of the day was over coming fear. I hadn’t practiced anything but figured I knew my stuff well enough to improvise. The trusty curtain rack was the toy for us to play with. We took turns going through, practicing stopping to reassure our horses, not forcing, offering lots of rewards.

I had planned on talking about how we can use scratches as a reward, and did, but everyone there was very happy to feed treats!

One girl had been working on teaching her stout enthusiastic 24 year old horse to kiss! I told her we could work more on that is she’d like. Then never got a chance to 🙁 It’s so hard to get to everything!

The horsewoman and her husband do clicker training! A mixed bag of clicker and Parelli. Their horses were getting clicked and treated like crazy. Two sisters there because their whole family is new to horses were m ore than happy to offer their horses food as a reward for their good behavior. My best friend who came along for support and to offer her help, which was priceless, was willing and interested.

Out here in the middle of nowhere, ranch and cowboy country, we had a clinic of random riders who were all interested in rewarding with treats, interested in tricks, and in no way bothered by the idea of using positive reinforcement. How cool is that. We get a bit of a bad rep among positive reinforcement people. Many people seem to think that the cowboy type is rough and tumble, bucking horses out, and forcing them to their will. I’m not going to say that type isn’t out there. It’s there no matter where you go in the horse world. It’s not all there is though!

The clinic was going great. Then we got attacked by nose flies! Anyone who isn’t familiar with nose flies is lucky! They are large buzzing flies, similar in loos and size to bot flies. They fly around, or according to some UP, a horses nose. Predictably, horses aren’t fond of them. To the extreme.
The first horse they found was the youngest girls. They went for her horses nose, the horse started in with some enthusiastic nose flopping. She was a great old horse though and restrained from getting overly violent. Other horses started swinging their heads around and striking out with their front feet.
I’ve had horses rear then throw themselves to their knees rubbing their noses in the dirt trying to free themselves of the pests. It was time to stop. An arena full of small children and horses fighting nose flies is the stuff of nightmares.
We called an early stop to the fun and rushed to get horses into the safety of the trailers. Even stopping early it was a good day. For me at least. I hope the others enjoyed it too and were able to find something to take away from it. 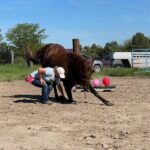 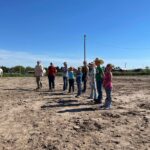 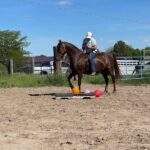 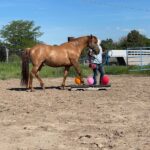 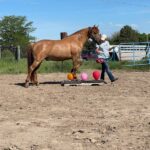