So often it can be hard to tell what aspects of a horse they are born with an which ones they have developed from the handling they have received over time.

Righteous is one of those horses.

He came with a whole list of behavioral issues and phobias. Luckily for him he landed with one of the few people willing to put the time in to help him. Explosive and overly sensitive, getting him closer to being a ride-able horse who could be handled on the ground has been a long journey. Through all of it though Jessica has maintained that at heart he is a sensible willing horse who was badly started.

When she sent me his pictures I was surprised. Knowing of the horses issues I expected to see much more extreme head shape and whorls. Instead we see a dished profile, sensitive, but not overly so. A nicely squared off rectangular muzzle, steady, dependable. His eye has the look of eagles, proud, capable, intelligent. His jowl is large, a quick learner, athletic. His chin not overly complicated.

From the front we see his ears, sensitive but widely set, intelligent, willing, steady. His whorl is a simple, slightly high whorl. As expected to go with the rest of the head he’s an extrovert. Extroverts are very invested in the external world, everything going on around them. They want to go, to be moving all the time. Emotional and sensitive they will be as brave as they can be and eager to please with a sensitive supportive rider or a nervous wreck with a harsh rider who doesn’t give the support they need.

While everything about him says he should be sensitive and emotional there’s nothing that should cause him to be reactive to the point of being uncontrollable like he was when he came to Jessica. She believes in the willing level headed horse she knows is hidden beneath the veneer of the handling he has received.

Not everyone should take on this sort of a case. Jessica has put in a lot of work and careful training. Without her skill and effort the outcome could have been very different. Fixing issues caused by poor handling can be extremely difficult. 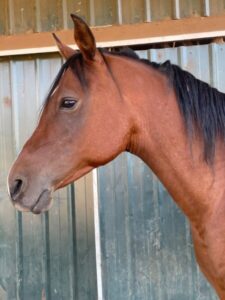 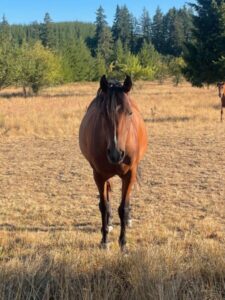 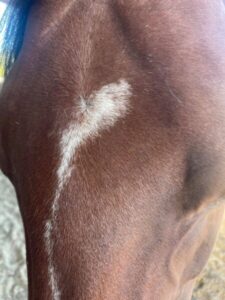