It’s hard to get past the idea that something bad has to be done before we can reward for being good.

It is easily over looked that we should be rewarding our horses for doing good without waiting for that spook or pull first. Think of all the trouble we could avoid if we didn’t wait for the bad but looked harder for the good that was offered willingly?

The school my children go to is trying very hard to use positive reinforcement with the children. Finding a reward that is motivating is much harder for teenagers than it is for horses. Finding a high enough value reward is only part of the problem they are facing though.

That idea that bad has to be done before we reward good is so deeply ingrained in all people, not just horse people.

The children who read well, sit still, do their work, try hard all the time, seldom get rewarded. They watch the children who seldom perform the behaviors being asked of them receiving a high rate of reinforcement and wonder why they are trying? Should the reward for doing good be intrinsic? Yes, in large part it should. Convincing an elementary students of that as they watch another child get treats and trinkets is a little more difficult.

Do the other children need a higher rate of reinforcement? Yes. They most likely do.

Does that mean that children who are performing the desired behaviors don’t need rewarded? No. It most certainly doesn’t.

When we withhold a reward we are performing positive punishment. When these children are watching another child receive something while they get nothing for the same behavior that is strong negative punishment.

Don’t think they don’t notice. Comments are made all the time. As the children get older the negative punishment achieves exactly what it would be expected to. Many children stop trying. They get bitter about the rewards. We have conditioned them to negative associations with the rewards and the work the rewards are supposed to be rewarding.

What if instead we looked for the good that was willingly being offered?

There are no easy answers. Horses are so much easier to train than children. The try should always be rewarded though. If we punish the try we soon loose the greatest power a child, or horse, possesses. 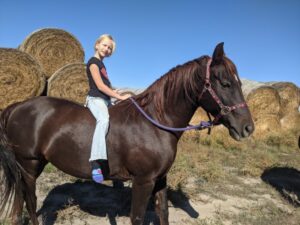