When I was a small child our horses spent their winters turned out in the corn fields. Now that would scare me half to death and I would never do it. Back then we didn’t know any better and they were fine.

One of the benefits of it was that we spent a lot of time riding through the corn stubble. Even later, as I got older and they no longer wintered in the corn stalks, it was still a great place to ride.

As we rode through the corn stalks we developed a game. A version of teaching ‘touch’. We would spot ears with the corn still on. A great treat for the horses! The only problem was getting the horses to find the treat.

So we started teaching our horses touch! Kind of. We would position them so when they dropped their head they would land on the corn and taught a head down cue. It became a great game with the horses paying close attention to us because there was a reward waiting for them when they listened. We all learned to listen to each other better and what cues meant. They learned to touch, to go to the things we asked them to.

It was a great game. One we still play today. 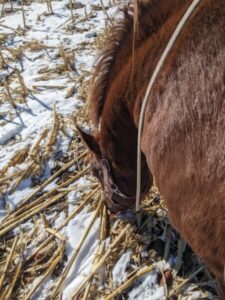