Heildorf is off to cowboy camp.
I am a positive reinforcement trainer. It might seem odd to some people that I sent my horse off for some cowboy to ride. Aren’t cowboys mean to their horses? After all, we call it cowboying a horse for good reason right?
There is so much going on here, I’ll try to keep it short and simple.
I sent Heildorf off to be ridden by a wonderful trainer who did a great job with him. She helped him find a way through his fears. Showed him that he wasn’t going to be hurt or chased.
It wasn’t enough though.
When a horse has serious phobias thirty days, or sixty, isn’t long enough to make them go away. When he got home he was better but still jumping and wanting to bolt. More than I was comfortable handling.
A friend of mine volunteered her husband who has been away from colt starting for awhile due to injury. Not injury from colt starting, I should mention that.
I was a bit worried. When he showed up to try Helly out he was talking about trust accounts and rewards and I lost any worries I was holding.
He hopped on and dealt with the bolting without fear or reprisal. Just sat it calmly and the two of them were off. With a calm person in the drivers seat Heildorf is being shown, calmly and patiently, that he doesn’t have reason to fear. He is allowed to show his fear, then comforted by the lack of reaction, then given a job to do to take his mind off of the fear.
Positive reinforcement is a wonderful tool. Horses learn so fast and happily with it. Could I have gotten Heildorf through his fears using only that one tool?
Probably. Eventually. Until then he would have been still scared. Still hating what we were doing together. It was a long process that wasn’t nice for him.
The work he is doing now is the equivalent of ripping the bandaid off quickly. It faced his fears head on. Fears he has already been shown, patiently and kindly, are unfounded. This isn’t forcing learned helplessness onto him. This is Holding his hand and jumping into the deep end together then holding him up once they are in there.
Heildorf has spent the last week moving cattle, crossing water and deep ditches. He has been roped off of. He is getting out there and being given a job to do.
He is perfectly calm and happy with all of it except that one deep phobia of seeing a person behind him out of both eyes when standing still.
Working cowboys, not the wanna be cowboys who live on the edge of town or on a few acres, have to spend their days with their horses, depending on the horse to take care of them and keep them alive. They get the reputation unfairly. For the most part. There are bad ones in any group of people.
Heildorf is being rewarded, loved on, and handled with a calm consistent hand. I’ve watched him take comfort in that. Let out huge sighs, releasing the tension and relaxing with the work.
I’m not saying all horses who are afraid should be ridden through it. I am saying that getting over fear is a long process. It is a process. Heildorf has been working through it slowly and carefully. This is just the next step in the process.
Being given a job to do is good for almost any horse. 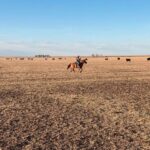 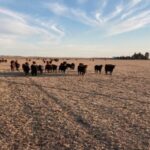 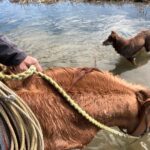 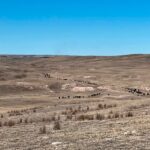