It started out the way so many situations do with our horses. Something is supposed to be easy. After we have already started, to far in to stop, the horse says no. It isn’t easy at all and they want nothing more to do with it. But we have to finish. It isn’t safe to stop where we are, or in the case of vet or farrier visits things can’t be left undone.

We need to get the job done. Whatever it takes.

Only instead of a horse this was my son.

He doesn’t like the dentist, but he had held up long enough for the cavity to be drilled out. There was an open hole in his tooth and he wasn’t going to let them do anything about it. No way no how.

So, we got the job done. It was not a good or pretty thing. It left me traumatized so he must have been in an awful state. Unfortunately the patch was the quickest easiest possible. It wouldn’t last. They would have to try again.

So we started training. We reenacted the scenario as best we could. Laying back and letting me look in his mouth. Adding bright lights shining down at him and poking around. We even got to do a practice run getting a cleaning without any teeth work done. Like with a horse traumatized by a bad vet visit it wasn’t smooth sailing. Everything took time and patience. Large rewards were needed.

Today it was time for the real deal. Our second chance to see if all the prep work had worked.

We got there right at the appointment time. I thought less time to think about it would help. They were running late. He was huddled in my lap. I thought it was never going to work. Instead all that extra time gave him time to settle and relax.

By the time they called us into the office he was calm and happy. He watched his sisters teeth get worked on, then he was huddled in my lap again. I offered support, comfort, and distraction. Yelling and forcing would get us no where. Isn’t it amazing how the principles are the same no matter the species?

Once they finished up with his sister he got to sit in the chair and wait. I thought it was going to lead to trouble. Instead, once again, time to sit, get accustom to the new place and idea, let him calm down. By the time the dentist came back he was ready to go. They let him see the tools, demonstrated how they worked as much as possible, and, most importantly, gave him a stop cue. Anytime he needed them to stop all he had to do was raise his hand.

Allowing a horse or human control over their training, work, medical care, is a reinforcer all by itself. Control, a say in your destiny, can change everything. If we allow our horses to say no when they aren’t happy with what is going on they are far more likely to say yes. That is exactly what happened here. Any time he held up his hand they stopped and sat back, allowing him to sit up and take a break. When he did that I came in and offered what support and comfort I could. Rewarding him for stopping, offering comfort and support, instead of encouraging him to make them stop more often, helped him to keep going. We aren’t training a horse to be ‘bad’ by comforting them. Being nice isn’t letting them win. It is giving them what they need to face fear. If we are a safe place they will turn to us when afraid and trust us to get them through it. If we insist on being the boss and making sure they don’t ‘win’ they will fear us as much as whatever else is out there to get them and tell us no at every opportunity.

With all the reinforceres we all could offer, with comfort as a high priority, and being allowed to say no when he needed, he made it through the dentist for the first time ever. We overcame the past bad experiences and instead of huge withdrawals from the trust account ended with a larger deposit than we started with! Learning theory and what we do with our horses applies to anything that we can possibly train. That makes this relevant to horse training. It is a story of training success.

Of course we went for ice cream after. Excellent behavior deserves a jackpot reward! 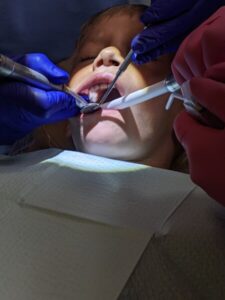