It’s been so busy I haven’t had time to share everything that’s been going on! Working on getting caught up.
We had to leave our last Wednesday night riding class early. my husbands boss was having a good bye party and we were joining them for dinner. With the trailer behind the pickup and horses on.
There were plenty of kids there. Some of whom had seen Rusty when we were at the school. They asked if they could see him again.
After eating we walked out to the trailer, feeling somewhat like the pied piper.
Unloading there in the middle of the street, in the middle of town, Rusty stood again for a small audience to pet him and ask for fist bumps. We couldn’t find the rubber chicken in the trick box that was still loaded in the trailer but did find a squeaky pig. Rusty was willing to play with that instead.He picked it up and whacked children with it.
He did wonderfully then loaded happily back in the trailer to get home. I haven’t had a chance to hardly touch him since then but he did great for his very busy week of being hauled all around while he awed children with his abilities. 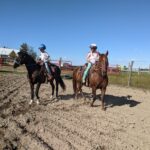 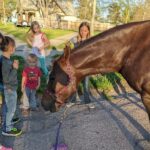 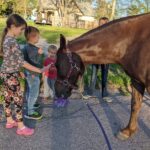 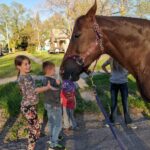