The Calves got out.

Not in a bad way. Just on the other side of the fence. It’s good that they are grazing that part. It would be better if they could get back where they are supposed to be by themselves.

Raising their own bottle calves is great for the kids. Even if they aren’t appreciating it at the moment. I sent them off to do their nightly chores. Get animals back in the corrals and off the grass for the night and get them their grain. Figuring out where the calves were and how to get them back was part of the job. I would leave them to it, taking care of other things, and help them later. If they needed it.

Time alone working to solve a problem without adult help is good for them.

After I finished my chores I stopped to help them. They had the calves almost to the gate. All by themselves. I only opened the gate for them.

They were one calf short.

The calf wasn’t lost. They knew right where it was. It was just stuck. The corrals are very nice. The old corrals are still there too. Just outside the other corrals. A foot or two on the outside of the fence. The new corrals built inside the old fence line. The last calf was stuck between the two fences. No way out. Not easily.

We all traipsed through the trees and waist high grass back to him. We looked, we talked, we pondered our options. One child started pushing him down the fence line. Then he shouted, the boy not the calf. He had found a break in the fence. The calf might be able to squeeze out. But barely. We pushed and broke branches and old boards. We all worked together to pull and push the calf through the little opening.

All the grass out there and he had just had to squeeze into the one spot he shouldn’t have been. We all worked together and managed to get him out. Teamwork, problem solving, perseverance, respect for the responsibility our care for the animals around us requires. All the things children need to be learning. How can anyone not love having calves around? 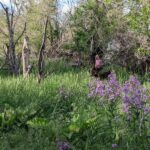 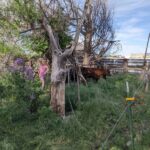 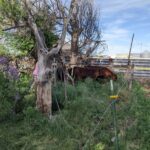 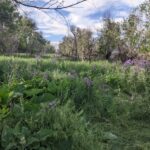