It was one of those days, cold fronts coming through one after another. Beautiful with the rain visible as it blows away before it reaches the ground, dark on light. And the wind howling til you can barely stand upright. A Perfect day for ground work.

I had a moment between sick children and the house work I should have been doing and snuck out to play with Rusty. We had been doing short workouts in the corral there with the other two and needed to get out a little. So we went out the back gate, down the scary lane with cattle on both sides and pheasants and Daisy, and out towards the corn fields where the cows are starting to calve. Going up the lane we were right along the wind break and it was nice out, warm still but not uncomfortably so. At the end of the lane we did some walk trot transitions and one big no we absolutely do not run and buck when being lead then continued on our way.

Around a corner we found twine caught on a fence flapping in the wind and, after a brief startle gave it a sniff then grazed next to it. After partaking of the good green grass we turned towards home. Then the wind picked up. Looking up to see the power lines blowing sideways we were careful to walk up wind of them. Dust was racing down the driveway leaving grit in our eyes and offering plenty of opportunity to spook. He had a couple of good ones. Darting past me to circle a couple of times before calming down to walk beside me again. So much better to get used to this without me on his back.

The horses came galloping to the fence as we walked by. He made another circle. They called and called to him and he wanted to join them but stayed next to me even of it was on tiptoes. Through the yard past tractors and trees and buildings he made it just fine. Behind the house we did a little work then turned him out with the others. It was a great day. 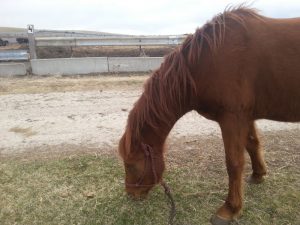 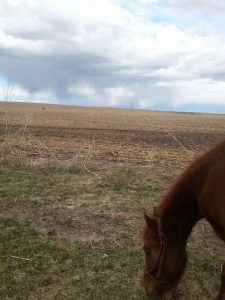 One thought on “Perfect Day for a Walk”