Every time I say “Hey, look! Rusty is so cool he can blah blah blah.” I stop and think to myself that that’s nice but can he ride? Playing fetch is all well and good but isn’t the end goal a rideable horse? For me it is, I want a good cow horse who can get down and cut a calf, who is capable of doing a pretty good reining pattern and going all day to cover lots of country. I want a ranch horse, who will let me carry small children safely and put up with a rope under his tail if I need to drag a calf. How am I going to get that if I spend what little working time I have teaching silly tricks?

I don’t like to do that. He’s rotten, he’s pushy and he’s a thinker. I hate to take that away from him, I like this whole working with him instead of against him. Mostly I like that he thinks our time working together is great fun. He’s not scared of me on his back, he knows it means more cookies. That doesn’t mean he always wants to do what I ask just that he’s not worried about me being there. Our time spent on silly little tricks is building a bond and a partnership. He trusts me and wants to be with me. I think our time not riding will lead to an even better ranch horse, maybe even help us get there quicker than if I concentrated on riding.

Just to be sure though I saddled him up and went for a little ride the last time I worked him. He was green and didn’t know the answers to everything I asked but he went where I wanted and even when he didn’t want to he came around without a big fight. It was a nice little ride and I think I can safely say, yes. Yes he does ride thank you very much. 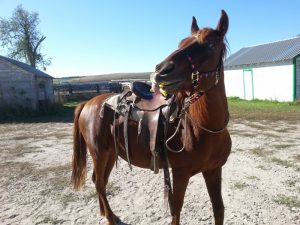 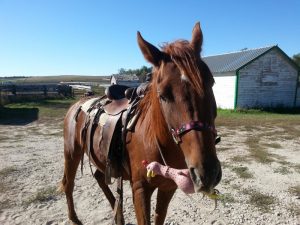