It is what started the whole thing. Almost. I only wanted a good little cow horse. Then there was a blog post about teaching a horse to fetch, it sounded pretty cool and I wanted to try. Along with that a good bow sounded like fun. I didn’t know how but I’ve never let that stop me. From there I wound up at Horse Tricks 101 and then clicker training. Now finally we’ve done it. Almost.

Not fetching, that was easy and done a long time ago. The bow was harder. I gave up for a while, worked on other things, really didn’t think we were going to try it anymore. But then we came back to it. It may have been the great lesson with Juan Carlos. Or it could have been the friend of my mom who was teaching it to her horse, nothing like a little competition for encouragement.

I tried to make him do what I wanted. I backed up a few steps and taught him a stronger foundation for what we were working on and tried again. He is always willing when food is involved. He’s been dropping lower and lower every time we worked. And technically we haven’t hit the ground yet. But we’re SO close. He grazed the ground with his knee, and didn’t jump up. He stayed there until I clicked and set his foot down.

I was thinking how it worked him unevenly. Everything we do on one side should be mirrored on the other, it was bothering me. So a couple of days ago I thought we should try the other side too. He caught up immediately. Now both knees are grazing the ground. Another time or two and I’m sure he’ll be all the way down.

After that just think where he can go with it! First from the ground, then mounted, then maybe laying down, kneeling on both knees even! First though an actual bow and get it on a cue. Boring little steps that probably shouldn’t be skipped over. 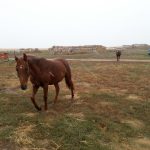 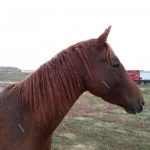 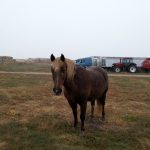 One thought on “We Did It! Almost.”