We moved cattle this morning. A neighbor and good friend is layed up and the father-in-law has been feeding his cattle for him. He decided it would be easier to just bring them home and feed them here. It should have been an easy move, two miles down gravel road with fences on at least one side the whole way. The time was set for eight in the morning. The afternoon was already booked for hauling cattle home that had been out to pasture all summer. The early start time should have left plenty of time to get done and haul the others.

I did not ride Rusty. Even if he had a little more riding, moving cattle is stressful and requires being able to get the job done and done quickly. Not a good place for a very green horse if you have another option. So I grabbed Coyote, and Princess Onna for Tanna who was coming along to help. The wind was brisk as was the temperature. The horses were feeling good, hot and antsy. We loaded them in the trailer for the ride over, they are fat and out of shape, don’t want to make them work too hard. Little did we know we would have need of all their energy.

Some friends from the big city came along to watch. We unloaded, sorted kids at least six, and waited for orders. There were nearly more people than cattle and surely it would be a fun kind of move, where everyone hung out and talked. Then we realized that they had started without us. My cow hating husband and his sister walked into the pen to push the small herd towards the hay bale meant to lure them out. They were having none of it. After two failed attempts we squeezed the horses past the payloader in the gate and went to help.

The pen was horse hell. Dead fallen trees littered the ground, while still standing trees, dead and otherwise added a higher element to the difficulty. As we entered I told Tanna to take care of her horse, if it came down to loosing the cattle or risking her horse, let the cows go. The four of us chased them around for a few laps, they found a different gate and left in the wrong direction, then finally went to the open gate we were trying to get them out. 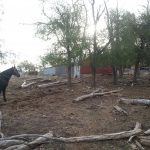 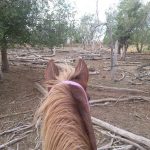 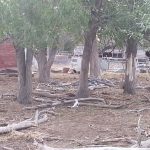 Coyote and Onna behave perfectly throughout. As long as your idea of a perfectly behaved horse doesn’t require that they stand still. In the chaos of running cattle, fourwheelers and downed trees a horse out of control could easily get its self and its rider seriously injured.  They did very well and we all survived.

Once out the cattle took off running and we were able to give the horses their heads. I thought it would be a quick jaunt to let Coyote blow some steam then maybe he would walk. It was just the beginning of a train wreck. A calf dropped to the ground as though dead while the others kept going. He got up and kept going with a little prodding but then dove through a fence. Usually it takes a few years to learn tricks like that, in a calf it’s impressive. And required Coyotes particular set of calf moving skills to keep him moving.

From there it only went down hill. Calves climbed through fences on both sides, cows took off running, cows plodded slowly until they were spread out over a mile. We ran the horses back and forth trying to keep them out of a corn field and on the road. The horses gave their all, happily using up all that excess energy. They were still prancing and hopping as we neared the end.

I have always said that Princess Onna is not a child’s horse but a horse ridden, with utmost care, by a child. Today she proved that. She was hot and crazed but still completely trustworthy. Coyote was lunging at the… halter. I had looked at his big cow eating bit when I tacked up this morning, and decided against it. They both were slightly out of control, but still light and responsive, happy to give what we asked of them. Well trained without loosing their spirit. It makes me happy to think that Rusty might be like this some day.

Fun to ride, dependable for a hard days work, definitely. Finished horses? Maybe not so much.