I had been having a mental block. Spanish Walk was beyond me. Still is maybe, but I feel like we’ve made a big step in that direction. I couldn’t wrap my mind around how to get him to move his feet. I can get on and we can go, I can walk beside him and he follows. But moving in the careful, controlled, one leg at a time sort of way that the Spanish walk requires was beyond me.

Then I realized, all I had to do was ask him to move his feet. Sounds stupid doesn’t it. It’s not all that easy though. It isn’t the hardest thing we’ve done, bowing is physically more difficult. Mentally, for me, this is harder.

First I made sure that, standing on his left side, I used my left lag to cue his simple bow. And Instead of placing it on the ground I stood balanced on my right leg with the left stuck out in front of me. Equine assisted yoga, I think is what we’re doing instead of training, that’s not easy.

After he spent some time putting his left leg forward with my left leg cue I stuck my right leg out. He put his left leg forward. It was what he has been trained to do, I wanted to untrain him. It baffled him not to get a click and a cookie for it. I reached across and tapped his right leg until he lifted it.  Then big reward. We spent a long time standing with my right leg stuck out. He started out barely moving that right leg, then started getting the idea. By the end of one session he was pawing enthusiastically right leg and left accordingly.

I’m so proud of him, changing the way he thought and picking up new things. And maybe, just maybe I’m proud of me for figuring out something so amazingly simple. It’s the little things in life.

And so it’s not all text, here’s some pictures of him painting. 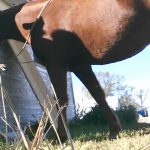 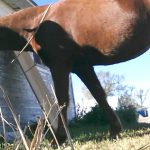 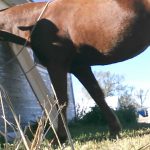