Suddenly our little accomplishments are not quite so impressive.

Tanna came over to play! I was going to say that we seldom get to see her but she’s been here helping move cattle. Maybe it’s that she’s not here just to play very often. School and a fun busy life get in the way, sad for me happy for her.

She came to help move cattle this time too, a tiny little bunch of cattle a very little ways across the yard, with a fence made of a small portion of the father-in-laws semi and vehicle collection to run them between. Not much of a move really and very farmer style, of course it went smoothly, there was nowhere for them to go. As the men undertook the task of putting all those vehicles away we went off to play with the horses. 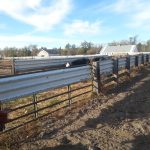 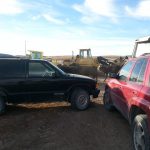 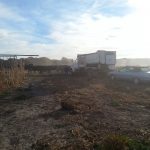 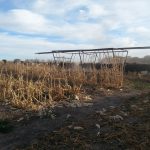 She brought her new saddle to try out on Onna, it has stirrups long enough for her to reach! and I hopped on Coyote without a saddle and we went for a nice little ride. Then she wanted to see Rusty bow and do his Spanish walk.

We brought him in and he was a little worked up still from being left alone. He didn’t run for his mat like usual, but did go stand on it once we all got there. We brushed some of the dried caked sweat off of his sides, being left alone is traumatizing. He was grabbing frantically at anything he could reach in the back of the pickup but was not interested in fetching his chicken. My daughter was helping too. She stood in the back of the pickup offering his target. He was watching it wave about occasionally touching it sometimes even getting the required reward. It was going to be a difficult day.

Not to mention that my great accomplishments of the week paled at the prospect of an audience. Overcoming hurtles in the privacy of our driveway all by ourselves suddenly seems like a baby step when people are watching. He waved each foot when asked while trying to run over me. Our audience was not impressed, I don’t think they knew we had done anything. He bowed nicely on each side. My daughter was disappointed that he didn’t put his legs behind him like she does with her hands.

We moved on to painting.

He was a painting fool. Splashing water all over the playhouse. I asked him to come do something different, he said no thank you he wanted to paint. So we decided to try it with…. paint!

It met with mixed success. We all got covered in paint, the playhouse even got a little. The paint was a big change and threw him a little. Back to the basics, again. Soon he was back to it and we all had a blast. As usual it was a family thing, at least today there was no child strapped to my back, made it a little easier. We had fun and maybe next time there will be some painting involved.

One thought on “Real Paint and an Audience”