It started out as a day without promise. Rusty forgot how to go out around the wing fence to reach the gate. Once saddled our time was interrupted by a child waking. I thought any hope of riding was gone. His father was out in the tractor discing a field. I decided we would grab Coyote and take the child to his father.
I clipped a lead rope to Rusty’s halter and thought we would bring him along. I went ahead and got on with the child, thinking it would be no problem to grab it once mounted. For once Rusty didn’t want to be anywhere near us. He would wait until we got close then scoot out of reach. After chasing him across the yard it occurred to me that he could follow along the way he usually does and I gave up on the catching.

Out in the corn field he was off and running. He galloped past us and off across the field then back by again. We zipped out to the tractor and left the child then back to the yard. Rusty running and bucking around us the whole time. Back at the house I found myself with time to ride but after watching all the bucking I was a little scared to get on.

My blanket had worked its self nearly out from under the saddle and everything needed redone. reassuring myself that all the bucking earlier meant he was less likely to do so under saddle not more likely I got on. He was awesome. We circled around our “arena” a couple times before he offered a trot. I clicked him and he stopped for his treat. We did it again practicing stops and turns. Finally he stopped to a loosening of the reins, with an exhale and soft whoa, and I got off. He was great, it wasn’t at all scary in the end.

I have some video, it’s too long to fit here. I will do some editing (shortening) and put it on Rusty’s facebook page. Until then here are the videos that would fit. 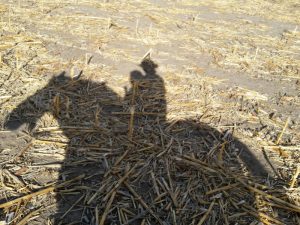 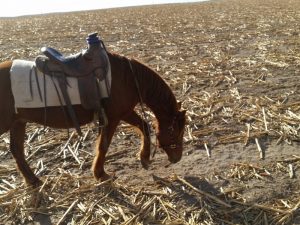 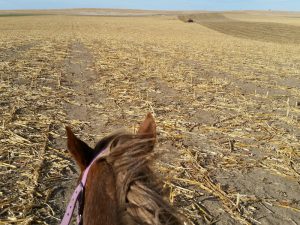 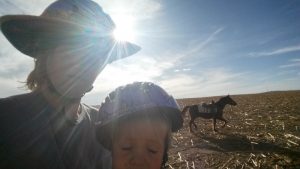